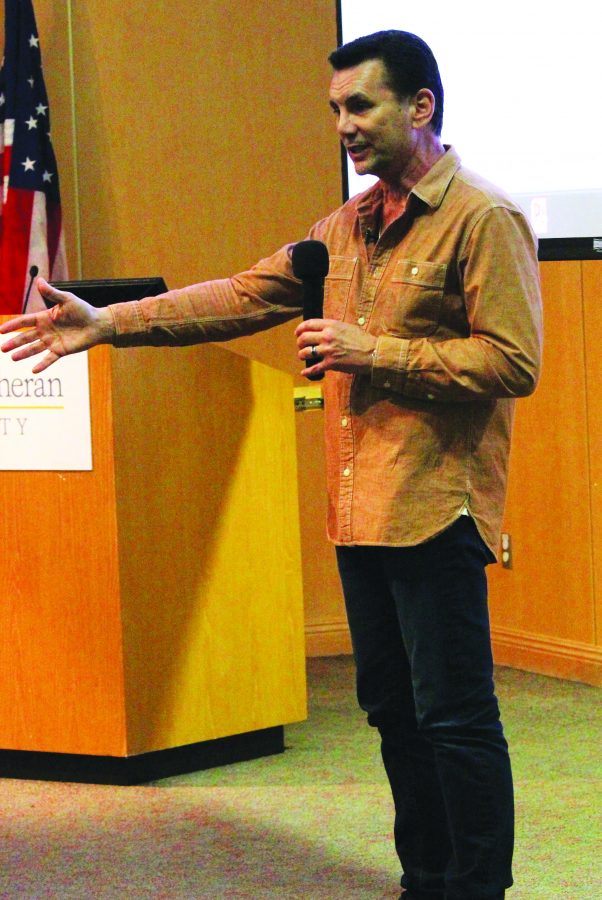 For many individuals, the life they are born into shapes who they are for the rest of their life. One’s family, the society around them and the culture with which they identify, all play key roles in determining the future course of their lives.

People look up to their parents, idolizing their fathers like Superman, and often see themselves walking the same path their fathers did. People envision a life like the one their fathers lived, seeing themselves make improvements where they’re needed and taking from the lessons taught to them as they grow.

But sometimes the life one is born into and the subsequent path one initially chooses to walk down aren’t what one was meant for, and one’s faced with the opportunity of new life or certain death.

Such was the case with Michael Franzese, once a powerful captain in the mob, who chose to wipe his hands clean and walk away from a life in which almost all those involved either end up in prison or dead.

On March 12, Franzese spoke to an audience of students, faculty and people from the surrounding area about his life, leaving the mob and his new calling toward his faith.

“I really hope that after they hear what I’ve gone through and how I’ve been able to overcome it, through God’s help, that they’re encouraged by it,” Franzese said to the audience gathered in Lundring Events Center at California Lutheran University.

Franzese was born May 27, 1951, into a family with powerful ties to the notorious Colombo crime family, one of the most powerful organized crime families within Cosa Nostra, also known as “This Thing of Ours.”

Franzese’s father, John “Sonny” Franzese, was an underboss in the family, and as far back as the age of five Michael remembers how their Mafia relations affected family life at home.

“For a period of about 10 years growing up in Brooklyn and Long Island my dad was under investigation from seven or eight different agencies, and every one of these agencies had a car parked around my house 24 hours a day, seven days a week,” Franzese said. “Whenever we as a family went anywhere, we had a parade of law enforcement vehicles following us. Everybody knew when we were coming into town.”

Franzese described incidents growing up where police and investigator tactics were out of hand and how when he was younger he was not fond of law enforcement, to say the least.

However over the years, through all the indictments and struggles he went through, his views on law enforcement and the life he led have changed.

“I do not feel that way anymore. I finally realized that they were the good guys, and we were the bad guys,” Franzese said. “It’s amazing how God can not only transform a heart but transform a mind.”

Franzese described how growing up his father never wanted him to be involved in the mob life. He was an athlete, playing baseball in high school and he eventually enrolled in a premed program at Hofstra University.

It wasn’t until his father was convicted of masterminding a string of bank robberies that Franzese chose to walk down the path of life that his father had never wanted for him.

In 1975, after his father was convicted and sentenced, Franzese began his involvement with the Colombo crime family, and by the early 1980s he had become a captain of his own crew.

Franzese rose to become a powerful figure in the mob through his scheme of gasoline bootlegging and avoiding taxes on gasoline.

At its most lucrative point, the tax avoidance was netting the crime family more than $3 million dollars a week, and in 1986 Franzese was listed number 18 on Forbes list of “The Fifty Biggest Mafia Bosses.”

Franzese’s quick rise in the mob was soon halted. In 1985 he was indicted on 14 charges relating to gasoline bootlegging and tax evasions.

Thirty years after his first indictment, Franzese traveled the nation and world spreading his story and the lessons he learned. He credits his wife, Camille, as the catalyst that pushed him toward God and his new found faith.

During his speech, Franzese described how completely opposite he and his wife are, yet he felt she was put in his life for a purpose.

Soon after he was sentenced, Franzese found his faith in prison and said it started with a guard dropping a Bible into his cell as he broke down due to the life of imprisonment he was facing and the new family he was leaving behind.

Franzese went on to read that Bible front to back, top to bottom, and to this day he still has the Bible, covered in more of his own notes than scripture.

After finding his faith he was released from prison in 1987 and moved to Los Angeles to start a new life with his family away from the crime family.

But one does not simply leave the past life behind so easily.

“There is no blueprint for walking away from that life publicly,” Franzese said.

Franzese was then targeted by law enforcement to act as an informant, but he would never succumb to their wants. During this time he was running from the life he had left behind, always looking over his shoulder to see if that day would be his last at the hands of those he was involved with during his time with the Colombo crime family.

Ultimately, after years of being in and out of prison again, both law enforcement and the mob deemed he was not budging from his newfound life and faith, and ultimately Franzese was left to live as he wished.

“I think my purpose in life now is to really be an encouragement to anyone and to give real hope to those people struggling,” Franzese said.

Helen Lim, associate professor of criminal justice and organizer of the event at Cal Lutheran said everyone could learn from the lessons he was speaking about.

“I think he has a message of warning and a message of hope and also inspiration,” Lim said. “He talks about his finding that this is his calling in his life now, and here at CLU as students, you’re all pursuing toward your goals.”