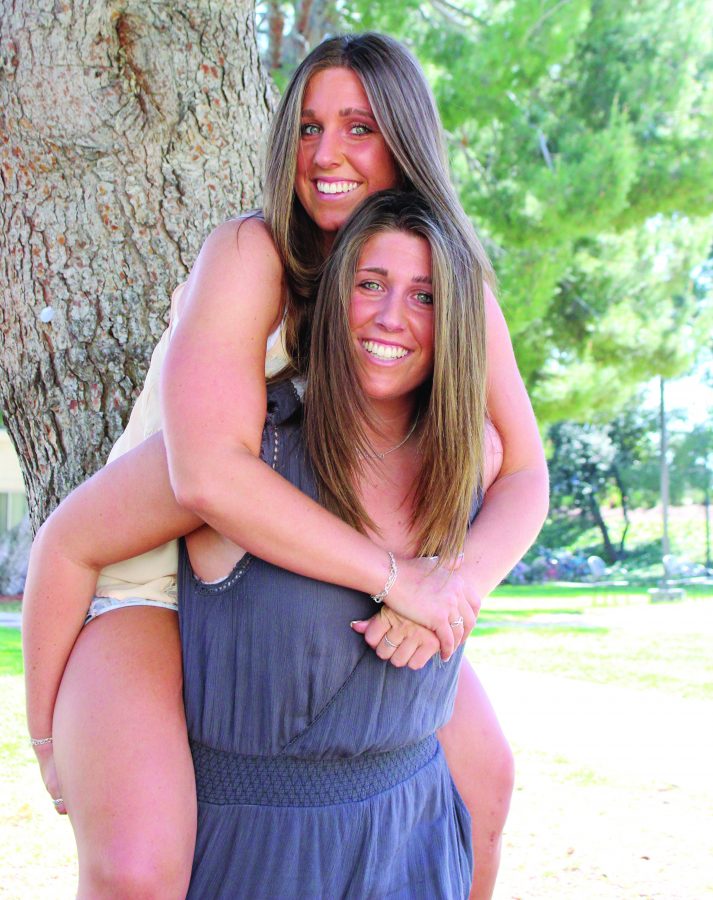 Double Trouble: Seniors Anne Marie and Kathleen Avery work in the Gilbert Sports and Fitness center and are both interdisciplinary educational study majors with a minor in exercise science.

The “Parent Trap” taught us life lessons like the combination of peanut butter and Oreos, and to never let an 11-year-old pierce your ear with a needle and slice of apple. But what if instead of finding your long-lost British twin you grew up with your twin?

Anne Marie and Kathleen Avery both work in the Gilbert Sports and Fitness Center, and they work the same shifts, often wearing the same outfits but with a slightly different color combination.

Anne Marie and Kathleen Avery are the only children of their parents.

“We had the same friend groups growing up. We never really had different friends until high school when we took different classes,” Kathleen Avery said.

Anne Marie Avery said people often confuse them. Their parents would even call them the wrong names growing up, and people compared them a lot. However Kathleen Avery said the way they talk and their personalities are vastly different from each other.

Libby Boden has been friends with Anne Marie and Kathleen Avery for about eight years. Boden said she definitely thinks Anne Marie Avery is the “motherly” twin.

“It’s not that Kathleen is immature, she’s just more of a free spirit,” Boden said.

Kathleen Avery said she tends to march to the beat of her own drum whereas Anne Marie Avery likes to plan out their days.

Kathleen Avery said even though they have different personalities, they both have similar tastes in clothes, music and their least favorite movie genre. The Avery twins said they don’t enjoy watching scary movies because it gives them nightmares.

One major similarity is their love for basketball. While attending Westlake High School, both twins held spots on the women’s basketball team roster and then continued to play for Moorpark College, where they put their twin powers to the test on center court. Their love for the game led them to matching anterior cruciate ligament tears.

“We both tore our ACLs. We had surgery two years apart, on the exact same date,” Anne Marie Avery said.

Lauren Blachowiak, a senior communication major at Cal Lutheran is one of the Avery’s roommates and also a close friend of theirs.

Blachowiak said last year Anne Marie was randomly assigned into her dorm room but she had no idea she was a twin because Anne Marie and Kathleen Avery lived in separate dorm buildings.

“For every way that they’re similar, they’re also different. It’s an odd day if they are not dressed the same, but their personalities are just so different. It’s night and day between the two of them,” Blachowiak said.

Last year Anne Marie Avery lived in Trinity, while Kathleen Avery lived in Grace. However, without talking to each other they would show up wearing the exact same outfit.

Every semester they have registered for the same classes. Kathleen Avery said it has just worked out that way because they are the same major, but it has been convenient to share the same books.  Even though sometimes it has proved to be a problem.

“Especially over the last couple of years, being in the same classes, teachers think we cheat off each other, and they’ve actually given us a zero and not given us credit,” Anne Marie Avery said. “We were working on a paper for one of our classes and our paragraphs ended up at the same spot. We sat in a different room, and she still thought we cheated.”

Kathleen Avery said they don’t even read each other’s papers anymore; they just share the same thinking process. Whenever they are ‘twinning’ in the same outfits, write similar papers or even finish each other’s sentences they said it’s due to their ‘twintellect.’

Anne Marie and Kathleen Avery said they will always have each other’s back and support each other, but they do have their quarrels from time to time.

“I’ll be honest, the biggest reason we fight is because of boys. I think the problem is we try so hard to get to know the other boy that one of us is seeing,” Anne Marie Avery said. “I don’t like how stubborn she [Kathleen] is. She’s so set in her ways. It’s so frustrating.”

Boden said because they have each other’s back, if a guy is not treating one right, the other one can instantly see it and step in.

Blachowiak lived with Anne Marie Avery last year but is now living with both of them. Living with the Avery twins has proven to be an interesting dynamic for Blachowiak. She said she has seen a lot of highs and lows.

“These two are my best friends. We share everything. We’re very open together,” Blachowiak said.

Boden said they’re both very driven and smart women, and whenever she is around them she has a great time.

“They’re always there for me no matter what, no matter what time it is, and they’re also funny and fun to be around,” Boden said.

No matter where life takes them, both Anne Marie and Kathleen Avery said they will always be each other’s best friends.

“We’ve been twins our whole life,” Anne Marie Avery said. “We’ve always been together so we don’t know how not to be a twin. We’ll be there for each other through thick and thin.”