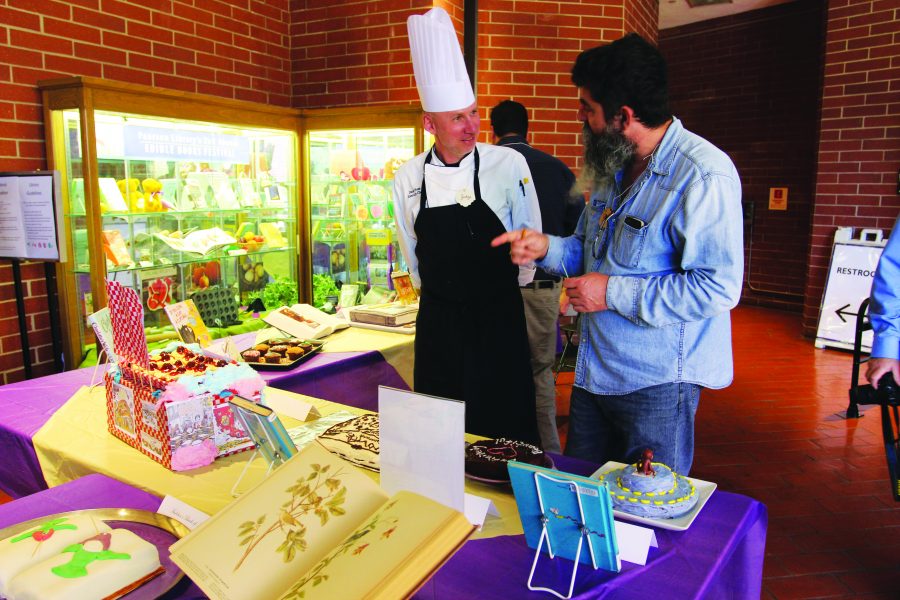 The Pearson Library at California Lutheran University sponsored the Second Annual Edible Book Festival on April 8 in the library lobby in honor of the French gastronome Jean-Anthelme Brillat-Savarin’s birthday.

Brillat-Savarin is famous for his book Physiologie du goût, The Physiology of Taste: Or Meditations on Transcendental Gastronomy.

Henri Mondschein, the information specialist at Pearson Library, coordinated the event because he wanted to bring this ephemeral global banquet to the students, faculty and staff of Cal Lutheran.

“This event revolves around the book and the author, but the creation doesn’t have to relate to the French man,” Mondschein said. “The entries are based on any book, movie, poetry, theme or character.”

The festival began with the 10 contestants’ edible creations on display in the lobby to be judged for the categories of best tasting, most creative and best overall.

The four judges of the event were Daniel Buss, the Sodexo Executive Chef, Dr. Michael Pearce from the art department, Michael Feliz, the manager at the university bookstore and Jada Yarnall, an administrative assistant for Residence Life.

Vanessa Hernandez’s cupcake creation based on the children’s book “Cloudy with a Chance of Meatballs” by Judi and Ron Barrett was selected as best overall.

Christina Helm, an administrative assistant for the Bachelor’s Degree for Professionals participated in the event and said she admired Hernandez’s delicious dessert.

“I really like the ‘Cloudy with a Chance of Meatballs’ creation. That one was really cute and very creative,” Helms said.

Most creative went to Aaron Graef’s peanut butter and chocolate clusters shaped like spiders based on the book “Charlotte’s Web” by  E.B White and Garth Williams.

“I call the creation a creamsicle pie because it is a mixture of two pies. It is a cream pie mixed with orange jello and cool whip on top. It’s orange because of a tiger in the book ‘Life of Pi,’” Peterson said.

After the judging was completed, the Cal Lutheran community had the opportunity to take a bite out of the edible pieces of literature.

Senior Carlos Moran, a student service assistant for the Pearson library, stopped by the event when the appetizing creations caught his eye on his way into the library.

Moran said the edible book festival was a great event for the Cal Lutheran students, staff and faculty to build community on campus because everybody loves food.

“It attracted different departments and students to come together and have something in common. Departments can be separate and not want to talk with each other, but this event brought them all together,” Moran said.

Mondschein said that compared to last year, the event was better because a more diverse group including students, faculty and staff from all departments throughout campus participated.

“The festival is a way to escape from the daily routine to bring everybody together and do something fun. It is a fun event for the community to get away from studying and papers,” Mondschein said.

Mondschein said the Pearson Library plans on sponsoring the Release the Stress Before the Test in May 2015 to prevent students from getting too overwhelmed with school work as the semester comes to a close.