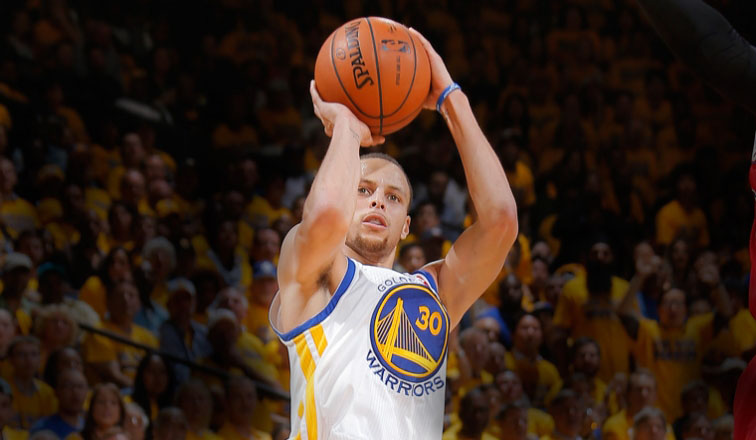 Golden State Warriors point guard Stephen Curry is one of the favorites to win the NBA's Most Valuable Player award this season. Photo courtesy of nba.com.

It is that time of the year again. The NBA playoffs kicked off on April 18, thus beginning the race between 16 of the NBA teams to win the Larry O’Brien trophy which is awarded to the winner of the NBA finals.

This year’s playoffs are full of storylines to keep even the most casual of fans interested in this year’s proceedings. Will the San Antonio Spurs be able to repeat for the first time in their storied history? Will LeBron James finally be able to bring a championship back to the city of Cleveland? And who is the real MVP this season, Stephen Curry or James Harden?

All of these questions and many others will be answered as the postseason continues throughout the beginning of summer, giving basketball fans plenty to talk about.

“I’m always excited when the playoffs get started because the games are always more exciting than they are in the regular season,” senior Henry Leff said.

The added excitement to the games can likely be attributed to the added incentive for the players to win during the playoffs. Each round of the playoffs is a best of seven series so every single game matters as opposed to the 82 game regular season where players sometimes take it easy.

“It’s plain to see that the games mean so much more to the players during the playoffs because they are playing for a piece of history at this point,” Leff said.

This NBA season has been a competitive one with teams battling for playoff seeding up until the final week of the season. Eight teams from each conference make it to the playoffs based off of their regular season record. In the Eastern Conference the Atlanta Hawks earned the number one seed.

In the Western Conference the Golden State Warriors secured not only the top spot for their conference, but the overall number one seed as well after having their best season in franchise history with 67 victories. These two teams haven’t been traditional powerhouses during their time in the NBA, so it’s been great for fans to see these two teams faring so well.

“I’ve been a Warriors fan for years so it’s been great to see teams turn it around these past couple of seasons,” senior Bryan Moss said. “We had the best season we’ve ever had and winning our first championship in decades would be the perfect way to cap off a season like this.”

According to NBA.com, the Warriors last won an NBA title in 1975, so their fans are excited about the possibility of bring another title back to the Bay Area. Another reason Warriors fans are so excited is the fact  they get to continue watching one of the best players in the league suit up for their team, Stephen Curry.

Curry has slowly been turning himself into one of the best players in the league since he was drafted in 2009 and it seems like he is now entering his prime as a player. Because of his extraordinary play this season he is the favorite to win the league’s Most Valuable Player award. He faces stiff competition from another rising star in the NBA, Houston’s James Harden.

“Curry and Harden have been the two best players in the league this season in most people’s opinion and there hasn’t been much to separate one from the other,” senior Josh Malone said.

Malone who is a student assistant coach on Cal Lutheran’s men’s basketball team, said the award could go either way considering the two players have been neck and neck all season.

“It seems like Stephen [Curry] is the favorite to win it because he is one of the most exciting players to watch because of his style of play. There aren’t many people who don’t enjoy watching his run- and-gun style of play,” Malone said.

No matter who wins the MVP award, this time of year is all about winning. All 16 teams are vying for the opportunity to make a lifelong dream of theirs come true and we all get the opportunity to watch them play for their spot in the history books.

If you are interested in following along with the postseason, check out NBA.com for a schedule of all the NBA playoff games for the remainder of the postseason.