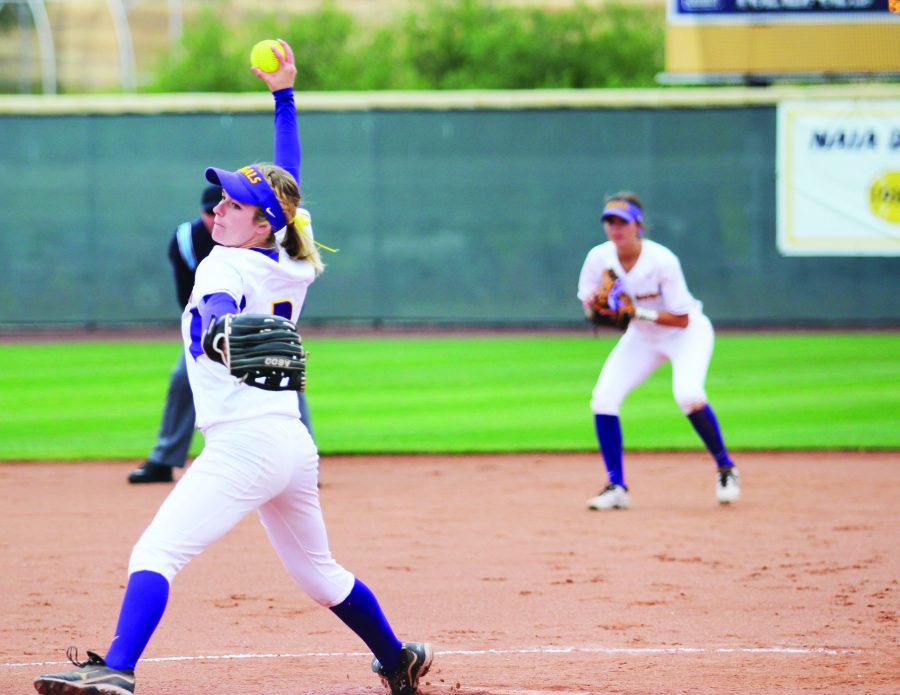 California Lutheran University’s softball team split a doubleheader on April 25 against visiting Whittier College with the Regals winning the first game 4-1 but falling 7-4 in the second. With the split, the Regals clinched a spot in the Southern California Intercollegiate Athletic Conference tournament, which will begin Friday, May 1.

Being the last home series of the season, five seniors were honored after the game for their dedication and the time they’ve put into the program. Kaity Carter, Shonna Christianson, Christina Hunter, Liz Mertel and Ryanna Moura all received flowers and senior gifts after the game in recognition of their hard work.

In game one, sophomore Courtney Sooy took the mound for the Regals and pitched her 17th complete game of the season, only allowing two runs on three hits, with nine strikeouts to improve her record to 11-11 for the season.

“We planned on winning three games this weekend and going as far as we can,” Sooy said. “I was just trying to give my team the best opportunity to win this weekend.”

Pitching on the opposing side for Whittier was Samantha Blum, who threw a perfect game the week before against Occidental College.

The Regals took an early lead against Blum, plating two runs in the first inning with RBIs by Amanda Lewis and Blake Lewis. The Regals weren’t done there as they added another run in the next inning to make the score 3-0.

The Poets answered back with two runs in the fourth but the Regals quickly came back with an RBI double by Olivia Leyva in the fifth inning.

In the second game, the Poets fed off of a great start by Blum once again, and used timely hitting to win the game. The Poets struck first with two runs in the top of the second, but the Regals took the lead after RBI hits from Scooter Rapisardi and Christianson.

Whittier responded with five runs in three innings to lead 7-4, and the Regals were not able to come back.

On April 26 The Regals split with Chapman University. In the first game the Violet and Gold fell to the Panthers 7-0.

The Regals stuggled offensiely, with the only two hits of the game coming from senior Christina Hunter and Leyva.

Despite heavy rain, game two had a different outcome with the Regals winning 12-2 via run-rule after five. Cal Lutheran saw clutch hitting from Christianson and Hannah Brown, who finished 3-3 with 3 RBIs and 2-3 with 2 RBIs respectively.

Although the Panthers took an early 1-0 lead capitalizing on a Regals error, the Violet and Gold would fight back.

The fourth inning saw much activity offensively for the Regals as well as two pitching changes for the Panthers.

Plating 10 runs in the top of the inning, Cal Lutheran had a comfortable 12-2 lead heading into the bottom of the frame, where they were able to hold and secure the victory.

Head coach Debby Day said she is very proud of her team for achieving its goal.

“We really came alive offensively in our last game and are super excited to move into the SCIAC tournament for the first time in program history. I’m very proud of our team for achieving our primary goal of the year,” Day said.

Joining the Regals in the SCIAC tournament will be Claremont-Mudd-Scripps, Whittier and La Verne.

Cal Lutheran will travel to Whittier College where it’ll face the Poets in the first game of the tournament at 9 a.m.

The Regals are looking forward to participating in the playoffs this year.

“We haven’t made the postseason in over 12 years or something like that, so it’s kind of a huge deal,” Sooy said.