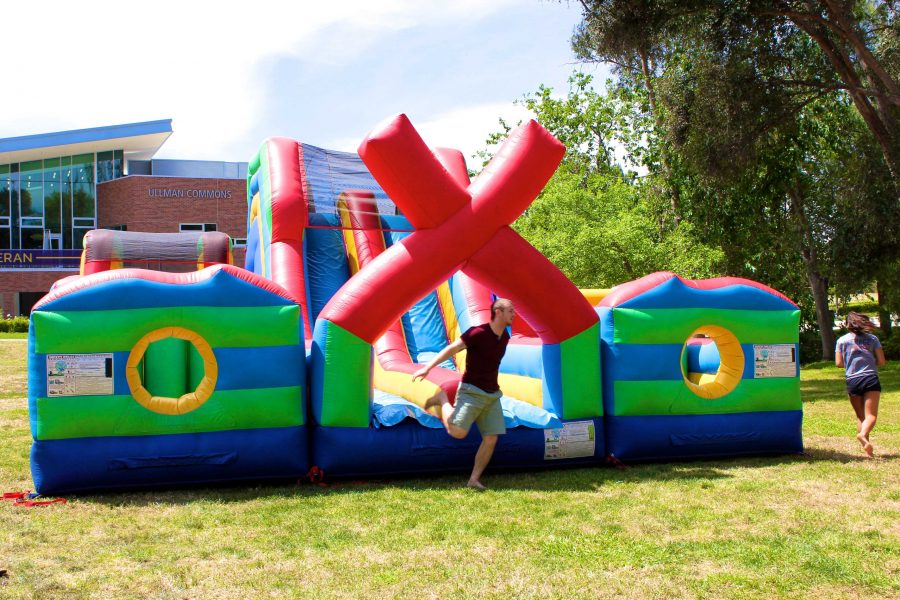 On April 30, the Zorb Balls returned to campus along with a bouncy obstacle course for a day of competitive fun thanks to the Afternoon Adventure series hosted by Recerational Sports.

Students were able to sign a waiver to participate in the adventure for as long as they wished, whether it was a 10-minute break between classes, a full hour or the entire three-hour block of playing around on the equipment.

“I’ve never done events like this before,” said California Lutheran University senior and participant at the event Taylor Pickett. “Going to this was a lot of fun.”

There was an inflatable obstacle course set up along with two Zorb Balls in Kingsmen Park. During the event the Rec Sports table played hit music to set the mood. The obstacle course had two sides so participants could race each other. Students fought through bumpers, jumped over walls, climbed “rock” walls and slid to victory.

The idea was to inspire students to be competitive and to burn off some energy.

“I wanted to get some competition going around on campus,” said Rec Sports Intern and organizer for the event Dominic Lunde.

“I think the obstacle course was my favorite of the two,” senior Brian Hix said. “It’s a little more entertaining. I mean, rolling around in a giant ball is fun, but you do the obstacle course, you hit into things and you’re running, using a lot of energy.”

The obstacle course turned out to be more of a competition among students than the Zorb Balls. Most participants used the balls to roll around, flip, bounce and even jump, using them for sheer fun instead of competition.

The heat of the day played a larger role on April 30 than it had for the previous Zorb Ball events in February. It was a warm 83 degrees Fahrenheit, which affected the plastic balls and inflatable structure.

“It was kind of hot. The plastic burned my butt,” Pickett said.

Other than the heat, participants enjoyed the event.

“It’s always fun to have things like this on campus, being able to come out and play like a kid again,” Hix said.

Hix said he enjoyed the event as a way to get rid of excess energy before finals.

Though the event drew many people to the park, they had a few problems with keeping the Zorb Balls inflated.

“We had a hole in one. They’re not ours so they’re not taken care of well,” Lunde said. “They’re used by a lot of people.”

One ball was half deflated due to its hole, but Lunde was able to fix it so the ball was up and running again shortly after.

The event series has been successful, drawing students in with the low commitment factor and the exciting attractions in Kingsmen Park.

“The one that went the best was probably the first Zorb Balls,” Lunde said.

Even though the Zorb balls were the most popular, Lunde said the mobile archery event was his favorite.

This was the fourth event out of five for the Afternoon Adventures series this semester. The fifth and final event of the series was held May 4 and included mini golf and a Jacob’s ladder.