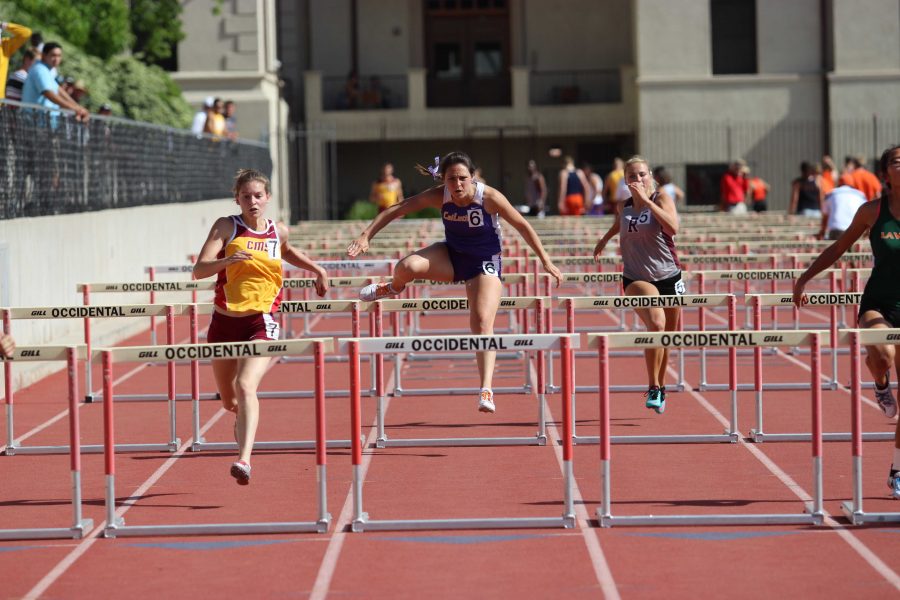 Junior Scout Gibson ran a 16.60 in the women's 100m hurdle event, putting her in ninth place.

On May 2 both the men’s and women’s track teams completed competition at the 2015 Southern California Intercollegiate Athletic Conference championships, with the men finishing sixth overall and the women ended the weekend placing fifth overall.

Even though neither team won the overall championship, there were many still plenty of victories among the participants from Califonia Lutheran University. For the Kingsmen, senior Trever Wood claimed the 110m hurdle title with a time of 15.09 while junior Michael Bassette repeated as the champion in the shot put.

“I fell a little behind at the start of the race and my opponent got caught up on one of the hurdles toward the end and I was able to take the lead and win the race,” Wood said.

The Regals were led by their All-American trio of junior Amanda Hamilton, senior Melissa Skiba and junior Allie Hadley as they added to their already impressive resumes. Hamilton won her second SCIAC title in the triple jump after battling injuries for much of the season.

Hadley won her third straight title in the javelin and also set a new meet record with a toss of 46.81m.

Skiba won both the 1500m and the 5000m to bring her title count to six over the course of her career at Cal Lutheran.

There were many other bright spots for both teams as a lot of new faces contributed for the Kingsmen and the Regals in what was their first appearance in the SCIAC championships.

Kingsmen Jhaylyn Hall, Michael White, Eric Daniel and Ronny Camacho all earned points for the Kingsmen in their first SCIAC championships, with Hall coming away with All-SCIAC honors in the triple jump. White, Daniel, and Camacho all participated in the 4×100 meter relay alongside senior Conor Finfrock and ran a time of 41.82 which was good for fourth place. Their time moved them up to seventh on the all-time Cal Lutheran record list in the 4×100.

Junior Will Zimmerle also earned All-SCIAC recognition by placing third in the discus with a toss of 41.54m. Junior Garrett Baker also set a new personal best for himself in the 1500m with a time of 3:59.74.

“I feel like we did really well as a team this weekend, we had a couple of guys win and everyone who participated in events this weekend really came out and competed,” Hall said.

For the Regals freshmen Anna Schlosser, Carlie Burow, Savannah Sipes, and Teigan Schentrup also placed in their events this past weekend. Schlosser, Burow, Sipes and Hamilton ran in the 4×400 meter relay and finished in third place with a time 4:03.46 to earn All-SCIAC.

Coach Matt Lea said he was proud of the effort displayed and the promise shown by the young members of both of his teams.

According to clusports.com Lea said, “Everyone competed really hard and I’m proud of them. For such a young team, we are making some big progressions.”

The Kingsmen and Regals track teams will be in action May 9 at the Occidental Invitational.