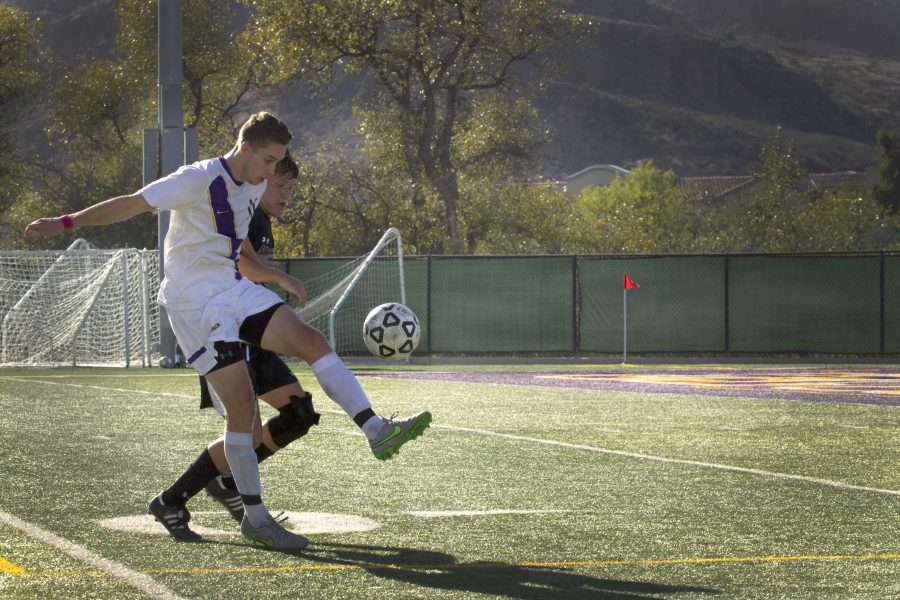 California Lutheran University women’s soccer team finished the week tied for fifth place in the Southern California Intercollegiate Athletic Conference after losing 1-0 to Redlands on Oct. 14 and tying 0-0 with Occidental on Oct. 17.

After the devastating loss to  conference rival Redlands on Oct. 14, the Regals were put in must-win situations for the rest of their season if they want a chance at the SCIAC postseason tournament.

“It’s got to be a turning point,” junior goalkeeper Coral Hasley said.

In the first half of the game Raquel Weckhurst scored but it was taken back after the referee said she was offside.

“I was bummed out. It always feels good to score and then for it to be taken away is never a good feeling,” Weckhurst said.

The Bulldogs scored just before the end of the first half, and they were able to hold that advantage for the rest of the game.

“It was very frustrating just because I felt like there was so much left on the table. There’s so much potential that we had that we just didn’t fully [execute],” Hasley said.

Weckhurst, the Regals leading scorer, has been playing with a strained quad which has caused some struggles on the offensive side of the ball for the Regals. Weckhurst’s 11 goals are second in the SCIAC.

“Every single game is a learning opportunity for me and whenever I leave the game dissatisfied, it always ends up being channelled towards the next game,” Weckhurst said.

Weckhurst channelled her energy and played hard against Occidental, not afraid to get physical even with an injury.

Vanessa Cox, whose family has been going to the Regals home games for two years since her son played on Regals Assistant Coach Mike Padilla’s U10 division team, saw Weckhurst’s determination on display Oct. 17.

“They have heart. Rocky [Weckhurst] came on board this year and she’s really strong and powerful in the front. You have Bianca [Deardorff] on the side and she’s also really aggressive. She gives it all, everything she’s got is on that field,” Cox said.

The game on Oct. 17 was special  for the Regals. It was a doubleheader, with both the Kingsmen and Regals playing. The Regals wore gold laces and gold ribbons in their hair for childhood cancer awareness night.

The Regals and the Cancer Fit organization honored Sophia Tapia, a childhood cancer survivor, by making her MVP for the night and giving her a golden soccer ball signed by everyone on the team.

The Regals wanted to win for Sophia, and while they played hard, they were only able to tie the Tigers of Occidental College.

“Tonight the soccer was better and the effort was better. They competed against a team that was very sound offensively. It was tough,” Padilla said.

The game went to two 10-minute overtimes, ending in a scoreless tie. The Regals were given three yellow cards in the second half.

“Sometimes those are debatable but obviously the ref has the final call. It shows me they are competing but it obviously has to be controlled,” Padilla said.

Both teams played hard as the final seconds ran off the clock. The last shot of the night was taken by the junior midfielder Miranda Campos, but was blocked by Occidental goalkeeper Sydney Tomlinson.

“I’m frustrated because we didn’t get the win, but it was a good stepping stone and it’s better than a loss,” Hasley said.

Padilla said the Regals need to get back in a groove offensively to succeed.

“We’ve had zero goals in 200 minutes, so I think if we put one behind the net, our girls will get some confidence and we will be back on our winning ways,” Padilla said.

The goal drought has made the Regals eager to get back on the board. Their next game is Oct. 21 against the first place Claremont-Mudd-Scripps Athenas.

“I’m hungry for a goal. I need a goal. We all want a goal and we’ve had the chances to get there  so we’re gonna get one,” Weckhurst said.