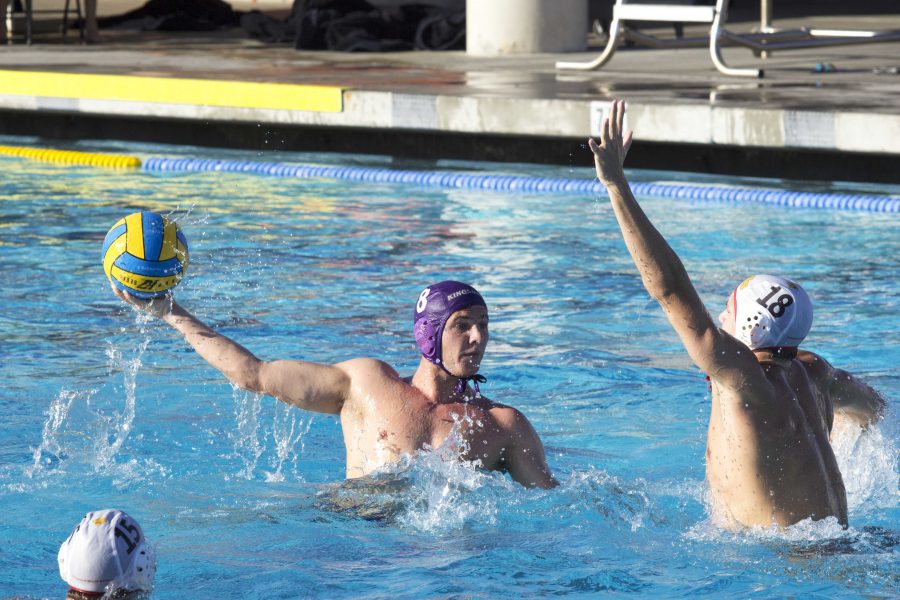 The California Lutheran University men’s water polo team took a defeat with a score of 7-8 in their second conference game against Claremont-Mudd-Scripps in the Samuelson Aquatics Center on Oct. 21.

However the Kingsmen gained redemption, notching their first conference win in a close game against the University of La Verne with a score of 14-13.

According to clusports.com,  Claremont-Mudd-Scripps is currently in first place in the SCIAC. Knowing this, the Kingsmen gave  their all against this opponent despite the outcome.

“It was a very hard-fought game.  The guys played great defensively.  We missed some opportunities that could have given us a different outcome,” Head Coach Craig Rond said.

The Stags took control of the first half by scoring a goal within the beginning of the second period as a result of their stable offense.

The Kingsmen were able to catch up with a second goal from sophomore center Camron Hauer, scoring his first goal and tying the score at 1-1.

The first half of the game kept a consistent pace of a close score, however the Kingsmen were trailing 4-2 going into the second half. Sophomore center Mats Albins, Hauer and goal keeper Nick Loomis anchored the Kingsmen defense against all the attempted shots made by the Stags.

“We definitely know that they are the No. 1 team in the conference. So we went in there thinking they’re No. 1, we’re not and we’ve got nothing to lose. So we might as well  just put everything on the line. We took all the risks and it went pretty well,” Loomis said.

The Kingsmen focused on defense as the main strategy since the Stags played with such an aggressive offense and even did their research on one of Claremont-Mudd-Scripps top players, senior attacker Tanner Cullen.

“I think that the only thing is that we just got to hone in on offense a little better. Just being in sync when it comes to passes and setting up our shots a little better,” Loomis said. “And we were definitely working on isolating their best player, [Cullen]. We did some research on him and shut him down. I think he had only one or two shots.”

Although the Stags held up their strong offense and scored up to eight shots by the third period, the Kingsmen didn’t straggle behind due to the consistent defense from Loomis.

By the third quarter Cal Lutheran played aggressively with power shots from junior attackers Zack Card and Ben Russell. The Kingsmen were scoring goals left and right, eventually catching up to the Stags.

Sophomore Chris Gardhouse surprised the crowd with a half-court goal with no seconds left on the clock at the end of the third period. This goal cut the Kingsmen deficit to three.

Determined to win, the Kingsmen picked up their momentum with another goal from sophomore center Ryan Moguel, making the score 8-6 in favor of the Stags.

“We started coming out better in the first half, but we’ve always hit our stride after a few quarters,” Moguel said. “It felt great that it was one of the goals I made that put us closer in the end.”

Card made his second goal toward the end of the last quarter, leaving the Kingsmen only one point behind from completely catching up to the Stags.

Unfortunately the Stags gained control of the ball within the last 30 seconds of the final quarter and won the game with an 8-7  final score.

“In the beginning we didn’t put shots in the way we needed to and toward the end, luck kind of swung the other way when they started putting away the shots they needed to,” Moguel said. “In the second half we both started missing [shots] at the same time. They made the one that they needed to make and we missed the one that we should have made.”

The Kingsmen were able to change their luck on Oct. 24 against the University of La Verne. In another back-and-forth thriller, the Kingsmen escaped with a 14-13 victory over the Leopards.
The Kingsmen got off to a slow start but gained momentum later in the second period.

After falling behind 6-4 in the first quarter, senior AJ Franklin scored two of Cal Lutheran’s five goals in the second quarter. The Kingsmen went into halftime with a 9-9 tie thanks to last minute goals from Card and Hauer.

Card and Franklin went on a scoring streak during the third period, putting 11-10 on the scoreboard. However La Verne tied the game in the beginning of the fourth quarter.

The Leopards were able to take the lead, however it was short-lived as sophomore attacker George French put a shot past the goalkeeper.

Eventually La Verne tied the game 13-13 but Gardhouse sealed the deal with his fifth goal of the game and gave the Kingsmen the 14-13 victory.

The Kingsmen improved to 1-2 in Southern California Intercollegiate Athletic Conference and 7-10 overall after the victory over La Verne. Their next game is on Oct. 28 where they will take on the Caltech Beavers in Pasadena, California.