The top feels so much better than the bottom 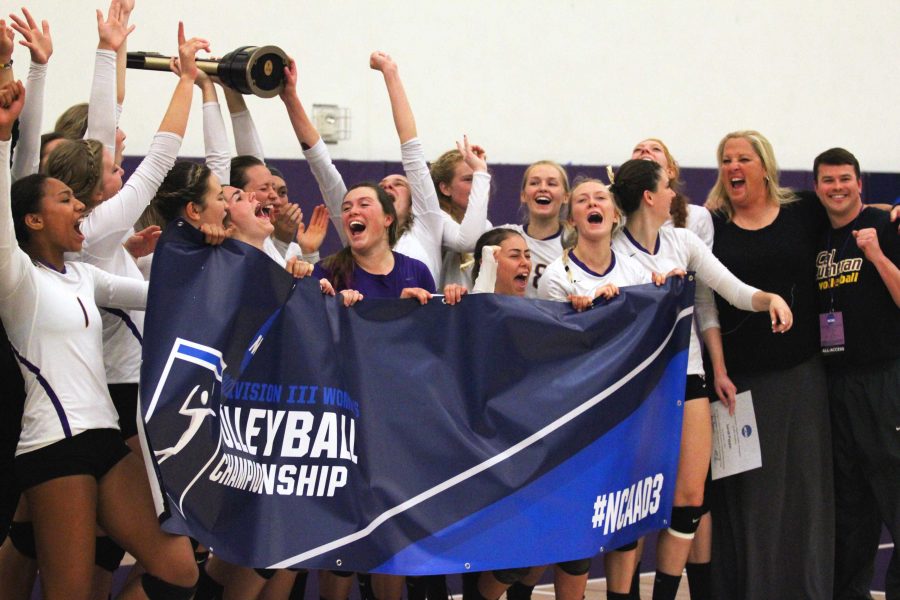 The Regals display pure elation after defeating No. 1-ranked Washington-St. Louis on Nov. 15. They will play for a National Championship in Grand Rapids, Michigan from Nov. 19-21. Photo by Annika Stenfjord - Photo Editor

The tournament welcomed eight teams to the Gilbert Arena, but it was the Regals who came out on top. Cal Lutheran won all three of its games and became the 2015 Regional Champions, earning a trip to the National Championships in Grand Rapids, Michigan.

Freshman outside hitter Amanda Roberts played a key role all weekend for the Regals.

“It’s overwhelming. It’s such a good feeling,” Roberts said. “Together the team and I have put in so much hard work just to make sure that we’re always on our game, and it’s been hard. It’s had its up[s] and downs but that just makes this moment so much better. When you work so hard for it, it’s crazy.”

Junior libero Nicki Tetherow could not have been happier with how her team performed on Nov. 13 and attributed their win to the hard work the team put in prior to the tournament.

“We worked our butts off the last couple of days,” Tetherow said. “Starting Monday we went really hard. Tuesday we went hard in practice. We really took advantage of the hour we were given on Thursday in here, and we just don’t want our season to end.”

Cal Lutheran was able to take the momentum into the championship game against No. 1-ranked Washington-St. Louis on Nov. 15.

According to clusports.com the Regals had a combined 13.5 blocks as a team against Washington-St. Louis, with nine assisted by junior middle blocker Monica Lundgren. Tetherow led the team with 16 digs and junior outside hitter Michelle Lawrence followed up with 12 digs.

Lawrence, who had 13 kills in the final, said that it was because the Regals gave it their all that they came out victorious.

“I am pumped, oh my gosh. It was crazy. We went out with our hearts on our sleeves and it paid off,” Lawrence said.

Lawrence was also awarded the Most Outstanding Player of the Tournament.

“It feels really good. I mean I honestly couldn’t do this without my team and they played awesome and we all were in it to win it and it showed,” Lawrence said.

Roberts said from now until they leave for Michigan, the Regals will be practicing and preparing for their next round of matches, with the hope of once again finding success.

“We’re going to have a practice tomorrow. Just to make sure sleep-wise, rest-wise, nutritional-wise that we’re on our A game. That way when we’re traveling we’re not at any disadvantage,” Roberts said.

The Regals will leave for Grand Rapids, Michigan where they will compete in the Elite Eight Nov. 19-21 in hopes of becoming National Champions.

Cal Lutheran will open the National Championships with Bowdoin College at 5:30 p.m. on Nov. 19.