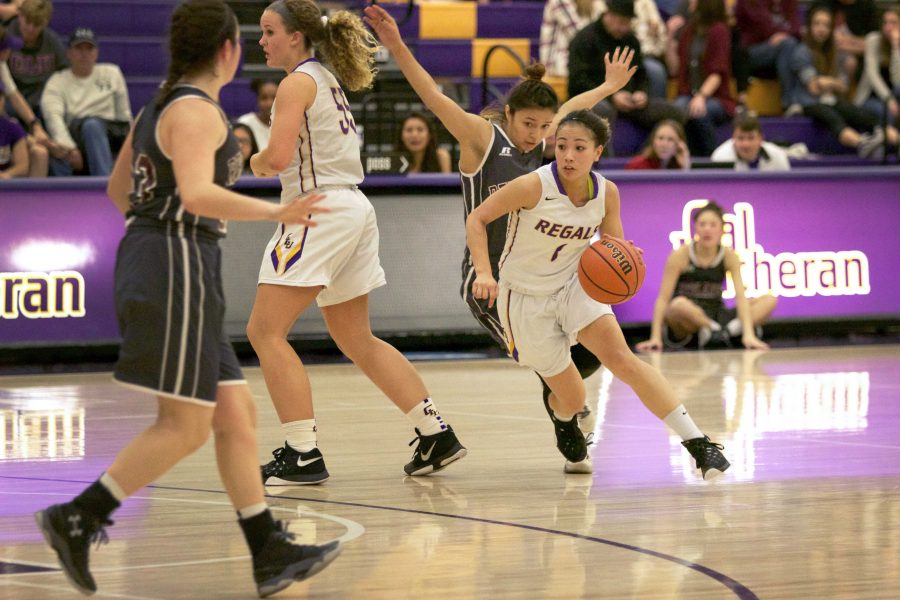 The California Lutheran University women’s basketball team played two games this week, each coming down to a deciding fourth quarter. The Regals beat the Redlands Bulldogs 67-60 but came up short against the Claremont-Mudd-Scripps Athenas 61-53.

The Cal Lutheran Regals took on CMS on Jan. 26 and got off to a sluggish start. The Athenas took an early 5-0 lead and after five minutes of play, Regals junior guard Trianna Owen made a 3-point jump shot to put them on the board. The first quarter ended with a 9-9 tie, the lowest scoring quarter for the Regals this season.

The Regals picked things up in the second quarter and went into halftime with a 24-20 lead.

After halftime the game heated up for both teams. The Athenas ended the third quarter ahead 40-34, with a two-minute run of no score from either teams to go into the final frame. CMS was able to hold onto their lead until the final seconds were ticked away. Junior forward Kris Brackmann from CMS ended the game with a game-high 16 points.

“I think we needed to set the tone,” Owen said. “We need to play our game and that always works for us.”

The Regals were able to turn things around in their next game on Jan. 30 against Redlands. The Regals came out strong and led the entire first quarter. They strung together 10 baskets from six different players to come out on top 19-18 at the end of the first 10 minutes.

“We definitely played as a team and that was our goal. For the past couple of games, we kind of got away from that a little bit and that was our emphasis,” Junior center Haley Hodgson said. “To share the ball and have each others back. On defense we wanted to be the aggressor and that was what we focused on today.”

“I think we played well especially in the second half. We kind of struggled in the first half on defense. In the locker room at halftime we really came together,” Salottolo said. “We knew we needed a win to really to get us rolling again. I just thought it was a great team effort win and we all played to our abilities.”

The second half was again very close the entire way through. The Regals were able to shut down the Bulldogs at the five-minute mark in the fourth quarter. They went on a 9-0 run and secured a 67-60 victory. Owen led the offensive surge in the final minutes, scoring five of the nine unanswered Regals points. Dunlap finished with eight points along with 12 rebounds. Owen finished with a team-high 16 points on the day to propel the Regals to a win.

“One thing that we talked specifically with Triana and Tatiana was that when you catch the ball you need to be a threat. I thought they were tonight and when they do that we are successful,” Head Coach Lindsay Goldblatt said. “It is a mindset for them and if they can continue to do that and be aggressive it puts us in a good position to win.”

The Regals will prepare for their next conference matchup on the road against Caltech on Feb. 6 at 7 p.m.

Click HERE to see The Echo’s exclusive post-game coverage of the Regals victory over Redlands.