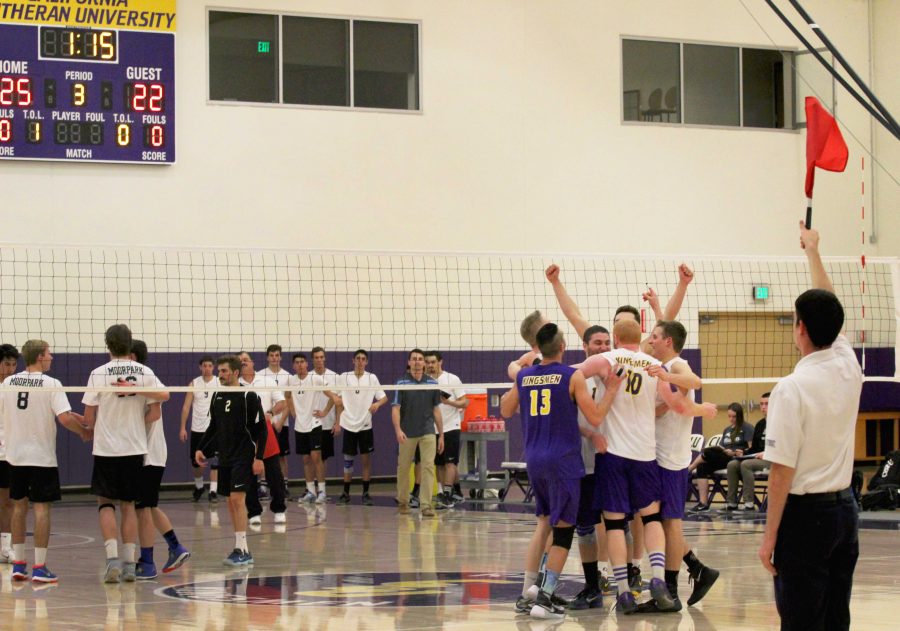 After losing their first eight games, the Kingsmen volleyball team celebrates after putting together a dominant performance against Moorpark College. Photo by Jackie Rodriguez - Staff Photographer

The California Lutheran University men’s volleyball team picked up its first win in program history on Feb. 5 against Moorpark College. The Kingsmen swept the Raiders in three sets by scores of 25-19, 25-15 and 25-22.

The Kingsmen got off to a quick start and dominated the first set 25-19. The Raiders trailed from the first point. Senior outside hitter Hunter Horn had five kills on five attempts. Junior setter Keaton Arutian had seven assists, six digs and four points.

“As soon as we put it all together and keep the ball on the court, we will realize that we can beat a lot of teams just by putting the ball back on the court,” Arutian said.

The second set started off close with a 5-5 tie. The Kingsmen then began to put the pressure on and scored five consecutive points, putting the score at 10-5. The Kingsmen were able to hold the lead for the rest of the set, which ended 25-15 in their favor. Junior outside hitter Kristian Gallardo, junior opposite hitter Robert Rutecki, and Horn had the most kills of the set for the Kingsmen. Cal Lutheran had 13 kills total with a .409 hitting percentage in the set.

“I think we came out with a different mentality. We all wanted to come out really strong and go out and crack balls and be 100 percent. I think today we played a little bit smarter out of the back. We minimized our errors and worked on it in practice,” Horn said.

The third set was filled with excitement on both sides as Cal Lutheran looked to clinch their first program win and the Raiders looked for a comeback.

“On day one we talked about a defense. We were kind of struggling to make that all happen out there on the court. We went over that again at practice yesterday,” Head Coach Kevin Judd said. “We found some more success with it today. That is all that they were really looking for to build on.”

The third and final set was tight in the beginning. The Kingsmen would gain a point but the Raiders would come right back each time. Cal Lutheran started to break away after a kill by Horn putting the score at 7-5 Cal Lutheran. The Kingsmen were able to keep the lead from there and finished the set at 25-22, sealing the young program’s first victory.

“Honestly the whole time we were very loose. I don’t think we have ever been that free flowing and goofy, still intense and just so energetic and very happy,” Horn said. “It really worked for our team and our style. Today was a lot of fun.”

Arutian finished with a team high 26 assists, nine digs and six and a half points. Gallardo and Rutecki finished with the most points at nine and a half a piece. Horn rounded out the points with nine, he had four digs and a .583 hitting percentage.

“I’m just so proud of the fact that the guys are kind of believing in each other, trusting in each other and coming together a little bit more,” Judd said. “Tonight they got to see that and feel that and I’m hoping that some more will come down the road.”