A pie in the face raises money for Relay for Life 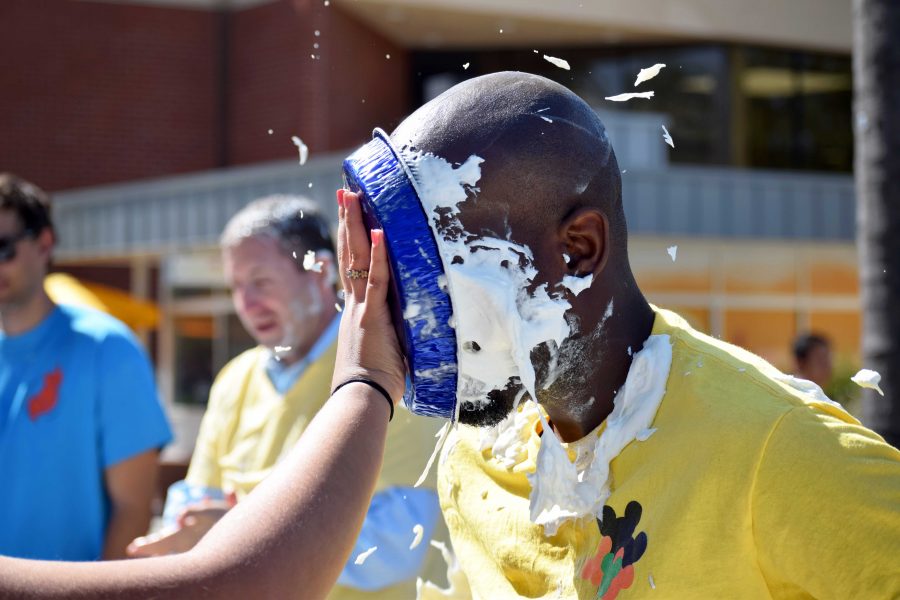 Student Involvement Coordinator Ri'chard Caldwell willingly is given a splattering pie to the face. Photos by Roman Valenzuela - Staff Photographer

By throwing a pie in a staff member’s face on Feb. 26, California Lutheran University was contributing to raise money to help end cancer.  The Coordinator for Community Service Center at Cal Lutheran Nicole Cozzi said the office of student life

has a team which will be a part of Relay For Life’s event in April.

“I highly encourage everyone to come out to Relay For Life,” Cozzi said. “It’s from April 8-9, in the arena. It starts at 6 p.m. and ends at 8 a.m. Regardless if you are on the team or just want to pass by, it’s going to be a very engaging and fun event.”

According to Relay for Life’s website, “Relay For Life teams camp out overnight and take turns walking or running around a track or path at a local high school, park, or fairground. Events are up to 24 hours long, and because cancer never sleeps, each team is asked to have at least one participant on the track at all times.”

The community service center intern and student at Cal Lutheran, Adam Cruz said he had pied most of the staff members throughout the event.

“It’s so fun to be able to pie all of the bosses in the face, it’s a good release,” Cruz said. “Nicole is my boss so I have not pied her yet because I don’t want her to get mad at me.”

Not only do the students seem to enjoy throwing pies at staff members, but the staff members also seem to like it.

For students or anyone who wanted to participate, a simple donation was required.

Senior and student at Cal Lutheran Dalia Flores said, “It is just a dollar, so hopefully you have a dollar on you and you get to donate to a grate cause and you get a little fun out of it.”

The event at Cal Lutheran may not gather a fortune, but every dollar is valuable at the end of the day and will be used toward research.

“If we can reach $25 that would be great, every dollar counts. And so far it seems to be a popular event,” Cozzi said.

Today’s event is also preparing for the upcoming Relay For Life event in April.

“Were raising money now for it because we have a goal of a specific amount,” Santa Cruz said.

The Relay for Life organization is not only trying to destroy cancer, but it also honors people who have died or survived cancer.

“We can really show the world that we as Cal Lutheran campus community care about this issue of cancer because sadly it has affected many peoples lives,” Cozzi said.

In fact, what is not better than when a fund raiser manage to catch people interest, and have them leave with a smile on their face?

“I like it, I think it is hilarious,” Flores said. “I think students are excited because they get to interact with student life in a new fun way.”

“This is just a fun way to help get money for the cancer society,” Simmeran said. “I’d do it any day of the week.”