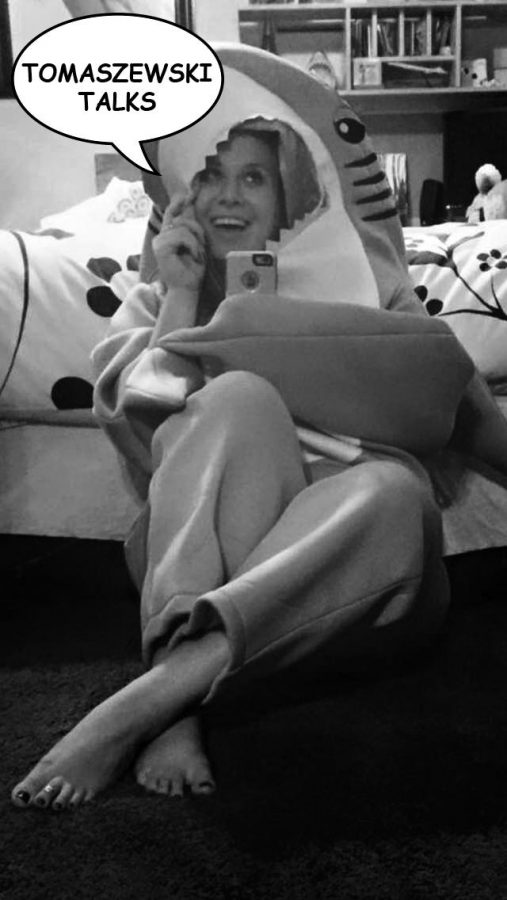 Heather is an entrepreneur of coffee and all things shark week. She is a communications major emphasizing in journalism and hopes to work in broadcast journalism after graduation. Heather is an expert at laughing at her own jokes so you don't have to, but you probably will.

When is it okay to wear shark fin hats and present fruit punch to your friends as blood?

If you’re thinking the answer is that you can only participate in these activities during Shark Week, you are wrong.

It was a trick question, because the only way to successfully go through life is to live every week like it’s Shark Week.

When the first week of August comes around my world is finally complete. There are no midterms, no boring television and nothing that can stop me from putting my dog in a shark costume and watching him destroy the seal toys I buy for him. This, my friends, is what pure bliss sounds like.

Some people look forward to Christmas and some think St. Patrick’s Day is pretty chill.

Not me. The national holiday that I count down to every year is Shark Week, the most magical week of the year.

But then I used to think why should this kind of happiness only be limited to seven days out of the year? Living every week like it’s Shark Week is the only thing that makes sense to me.

The first rule to living every week like it’s Shark Week is to not limit yourself to wear your favorite shark outfit. Wear those glorious dorsal fins year round.

I once put a $45 shark costume from Target on my credit card simply because I just felt like I needed it. I thought about calling a friend to see if someone could talk me out of such a purchase but then I realized that no one could give me a reason that I could find valuable enough to change my mind.

I still have not found a rational place to wear it to. For now it is saved for special occasions. Like doing homework or watching “The Office” reruns on Netflix.

Additionally, it is always a good idea to be up to date on all different types of shark facts. These are great conversation starters and ice breakers when trying to get to know someone.

It has been scientifically proven that girls who know more facts about sharks than any other land animal are able to find a boyfriend more quickly and with ease.

Just kidding, I made that up. But it’s the only way I know how to get through life so I’m just going to assume that my statement is 100 percent accurate.

The snacks are another reason Shark Week should be celebrated year round. So many snacks.

Do not pretend like a nice bowl of seal pudding doesn’t sound just as phenomenal in March as it does in August.

Wash down that pudding with a nice glass of fake blood cool aid and you got yourself a pretty exciting Thursday night.

I guess ultimately the point that I’m trying desperately to get across is that life should be lived with the highest level of excitement at all times. And this type of excitement can only be found during Shark Week.

Finally, live every week like it’s Shark Week simply because every other week is just a weak disappointment.

There’s one last thing you are going to have to remember if you want to live your life in an exciting shark-filled fashion. It’s always a bad week to be a seal.