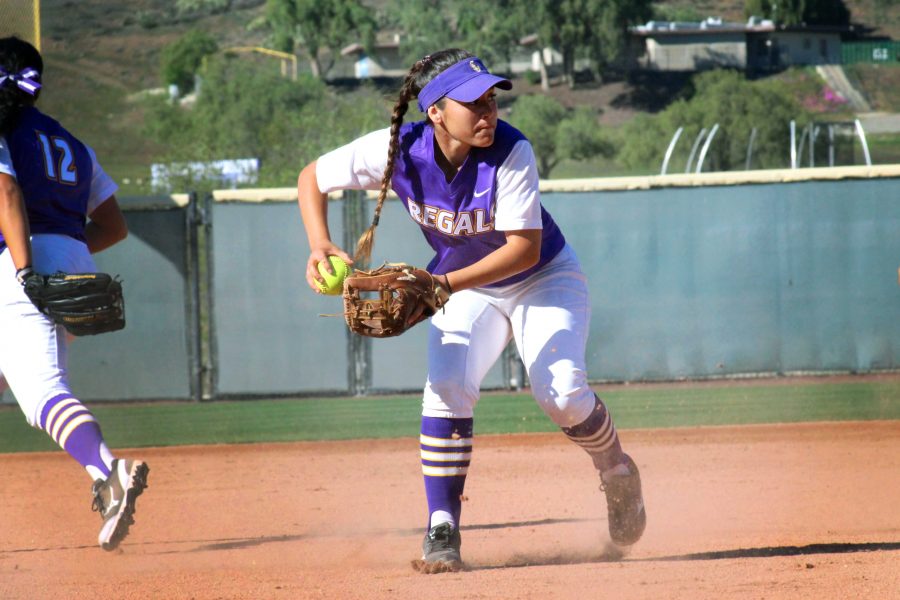 Junior and infielder, Monique Ramirez throws the ball to a fellow teammate during a game against Claremont-Mudd Scripps College. Photo by Kamehana Lee - Staff Photographer

On Feb. 27, the California Lutheran University softball team played a doubleheader against the Claremont-Mudd-Scripps. The Regals fell in a pair of inning-shortened games. According to the CLU Sports website, the first game ended in the fifth inning with a score of 8-0 and the second game was called in the sixth with a score of 12-6.

The Regals started out strong in the first game. Junior pitcher Courtney Sooy set the tone by striking out the first five Athenas she faced out. According to the CLU Sports website, Sooy pitched a complete game finishing with six strike outs but allowed eight runs on nine hits.

The second game would be no different. CMS appeared to have their way with Cal Lutheran the entire afternoon. The Athenas jumped out to an early 8-0 lead. They used a big second inning to put the game away early, sending 11 players to the plate and scoring 6 runs.

However, the Regals would not go down without a fight. Junior infielder Monique Ramirez got the first hit of the game for Cal Lutheran which would rally the girls into scoring three runs in the bottom of the fourth. Senior outfielder Andrea Brackpool hit a two-RBI single and the Regals scored one more run on a homerun by senior infielder Blake Lewis.

“We have glimpses of things getting better, we need to work on putting a full team effort together,” Head Coach Debby Day said. “It was a good early test for us to see how we match up. We look forward to getting better and playing them in the future.”

CMS responded to the Regals’ comeback attempt by quickly scoring two more runs in the next two innings. The game would end with a score of 12-4 in the sixth inning.

“I think we made a lot of silly mistakes, we were more aggressive the second game coming from a loss but could have been better,” Brackpool said.

“Courtney threw really well the first game, but today we had a rough start,” Lewis said.

Lewis is off to a scorching start this season, as she hit her fifth home run in the second game of the doubleheader. She also leads the team in batting average with a .513 average, according to the CLU Sports website.

“[My swing] feels good, just trying to go out with a bang my senior year and keep swinging,” Lewis said.

With the two losses the Regals dropped to 2-4 in Southern California Intercollegiate Athletic Conference play and currently sit in fifth place in the standings.

“We are a group that has a ton of great chemistry and fun in practice but have not quite developed our game personality yet,” Day said. “We are not where we want to be, but we are only six games into conference.”

Day said that the team’s ultimate goal would be to return to the SCIAC Tournament. She firmly believes that their goal of making the tournament is achievable. The Regals will need to finish in the top four in conference in order to achieve their goal.

The Regals will move forward and are set to take on the Chapman Panthers on March 5 in a doubleheader in Orange, California.