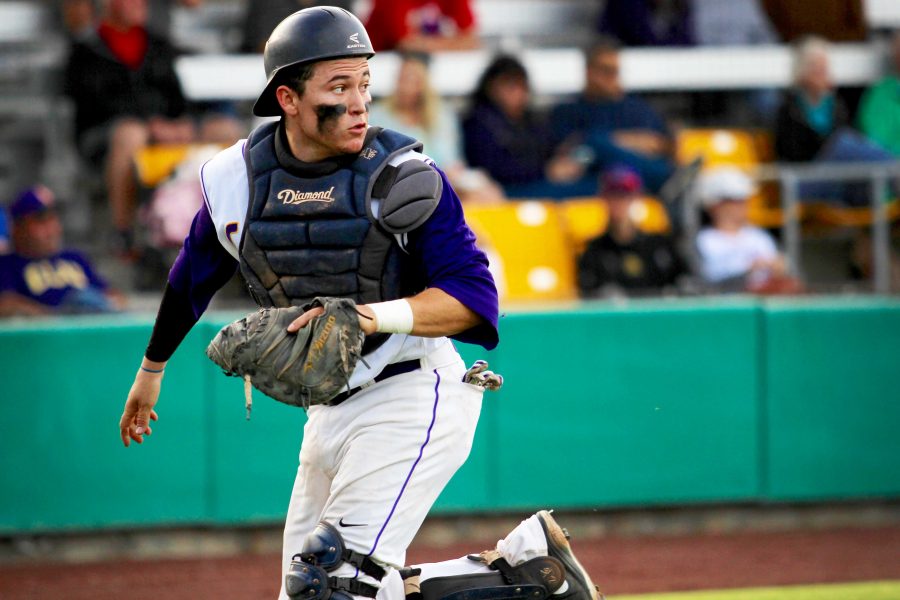 Junior catcher Eddie Villegas was 2-4 with an RBI in the Kingsmen’s Feb. 26 victory over Chapman. Photo by Roman Valenzuela - Staff Photographer

The California Lutheran University baseball team opened conference play against Chapman University. The Kingsmen won two out of three games to put them at 2-1 in conference and a 4-4 overall record.

In the opening game on Feb. 26, the first three and a half innings were very quiet for both teams, as neither were able to push a run across. The Kingsmen struck first in the bottom half of the fourth inning, which started with junior outfielder Gabe Gunter drawing a walk.

“In the beginning I noticed they just kept throwing a lot of off-speed,” Villegas said. “I was just thinking off-speed, off-speed and when I picked up the fastball I just tried to smash it.”

The Kingsmen lead 2-1 going into the bottom half of the fifth. Junior outfielder Sinjin Todd led off the inning getting hit by a pitch. Senior third baseman Davey Casciola followed with a single through the left side. After a wild pitch moved the runners to second and third, Gunter battled with two strikes and was able to line one out to right field and score Todd and Casciola to put the score at 4-1 Kingsmen.

“I really wanted to stay calm up at the plate,” Gunter said. “I knew he was throwing a lot of curveballs and sliders. Luckily he left one right over the plate and I put a good swing on it.”

Cal Lutheran put up another run on the Panthers in the bottom of the eighth on a single to right from Chad Clark that scored freshman first baseman Weston Clark to put the final score at 5-2 Kingsmen.

“My defense was working for me today. I didn’t have the best stuff out there but you have to grind through it. Kay made a great stop, Sinjin made a great stop out there, our defense was really working today,” Saito said. “It was a great team win for us especially at our home field and hopefully it carries over to tomorrow.”

The Kingsmen went to Panthers territory on Feb. 27 to finish the series with two games. The Kingsmen were able to split the games, losing the first game 12-2 in eight innings and winning the second game 11-1 in seven innings.

The first inning was long while the Kingsmen were on the field. Sophomore pitcher Nate Wehner started the game and gave up four runs and got taken out of the game before recording an out. Freshman pitcher Ryan Bill came in and gave up three runs of his own before the inning ended, putting the score at 7-0 Panthers.

The Kingsmen were able to put up just two runs off the bats of senior outfielder Justin Caña and Casciola before the Panthers scored again in the bottom of the sixth. Junior pitcher Tyler Nevins came in to relieve Bill with the bases loaded and gave up three runs before finishing the inning, putting the score at 10-2 Panthers. Chapman was able to push two more runs in the bottom of the eighth to put the 10-run mercy rule into effect. Senior pitcher Mitchell Shields gave up a two-run homerun to end the game in a mercy with the Panthers on top 12-2.

The Kingsmen were able to turn things around in the second game. They came out strong with the bats in the first inning putting up four runs on six hits. They tallied three singles, a pair of doubles and a triple by Weston Clark to put the score 4-0 Kingsmen. Chapman was able to put up their one and only run in the bottom of the first inning.

“I think everyone did their role and no one tried to do more than that. We had a good outing and we put up enough runs,” Casciola said.

Junior pitcher Marshall Pautsch tossed a gem. He faced just 23 batters in six innings. He punched out seven batters, while scattering six hits and allowing just one run in the bottom of the first.

“First of all when you win that’s good and it doesn’t matter how you do it. I think we played really well at times, but we still have to clean up a lot of stuff,” Head Coach Marty Slimak said. “When you win you win and for the most part the guys came to play today.”

The Kingsmen are set to play a series March 3-4 against the Caltech Beavers. The first pitch on March 3 will be thrown at 2:30 p.m. to continue conference play.