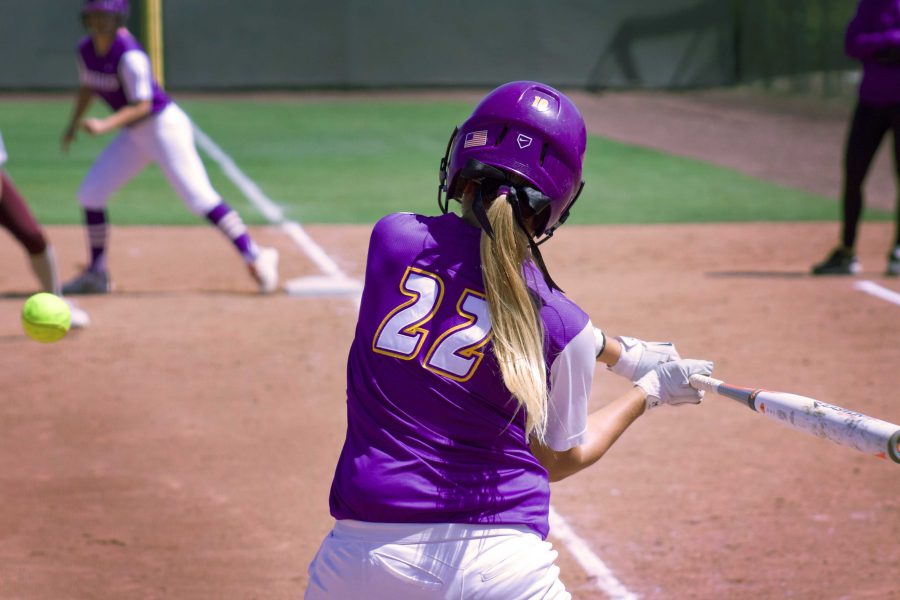 Senior outfielder Andrea Brackpool went 3-for-6 with a double and RBI in the Regals’ doubleheader against Redlands April 2. Photo by Kamehana Lee - Staff Photographer

On April 2, the California Lutheran University softball team hosted the Redlands Bulldogs in a doubleheader at Hutton Field.

“Before the game we knew they were going to be a tough team because they are right above us in standings and they have always been a good fight,” sophomore infielder Olivia Leyva said. “They were tough, but we were tougher, that was our mentality.”

The game started off highly in favor for the Regals with a team shutout of 8-0.

However, the Bulldogs would respond in the second game, winning in dominant fashion, 12-1.

Courtney Sooy played as a major contributor to the win for the Regals only allowing four hits and two walks. She was also able to strike out two Bulldogs.

However, it was not until the bottom of the third inning when the Regals got runs on the board.

Sophomore infielder Mikaela Mayhew and senior outfielder Hannah Brown started the charge with back-to-back singles. The excitement did not stop there as sophomore infielder Scooter Rapisardi made a sacrifice bunt and advanced both of the runners into scoring positions.

Junior outfielder Amanda Lewis followed with a single that scored Mayhew, giving the Regals the lead. Senior outfielder Andrea Brackpool continued the scoring with an RBI groundout allowing her teammates to add another run. The Regals ended the third inning with a 2-0 lead.

The excitement only continued for the Regals in the fourth inning as the Bulldogs gave up five runs.

In the sixth inning the game came to an early end as Sooy had an RBI single that enforced the mercy rule. This concluded the first game 8-0 in favor of Cal Lutheran.

Despite controlling the entire first game, the Regals could not carry the momentum into the second game of the doubleheader, losing 12-1.

In the second inning the Bulldogs started the scoring with a 3-0 lead over the Regals.

The game remained close at 3-0 until the Bulldogs scored nine more runs in the last two innings.

The Regals fought back to level the score, but could not come together to get the runs.

Sooy had started the game and continued pitching for the Regals for six innings, but due to errors on the field by Cal Lutheran, they were unable to keep up with the Bulldogs.

The loss was tough on the Regals especially since the first game was the complete opposite.

“After the loss, we were just a little disappointed in ourselves because we played good defense in the first and did not play good defense in the second. We were also hitting well but couldn’t really string them together, we just knew that we obviously could have done better,” Leyva said.

However, the loss did not kill the morale of the team.

“The loss does motivate us for the next game because we know that we are better than that,” sophomore infielder Jacy Watanabe said.

According to the SCIAC website, the Bulldogs were third in the conference and the Regals were in fourth. As the two teams left each with a win their current standings have not changed.

“Our goal for the rest of the season is to win both games and split with teams as little as possible. If we can minimize the teams we split with we have a very good chance of making it to the postseason,” Mayhew said.

The Regals next game will be another doubleheader on the road against Whittier April 9.