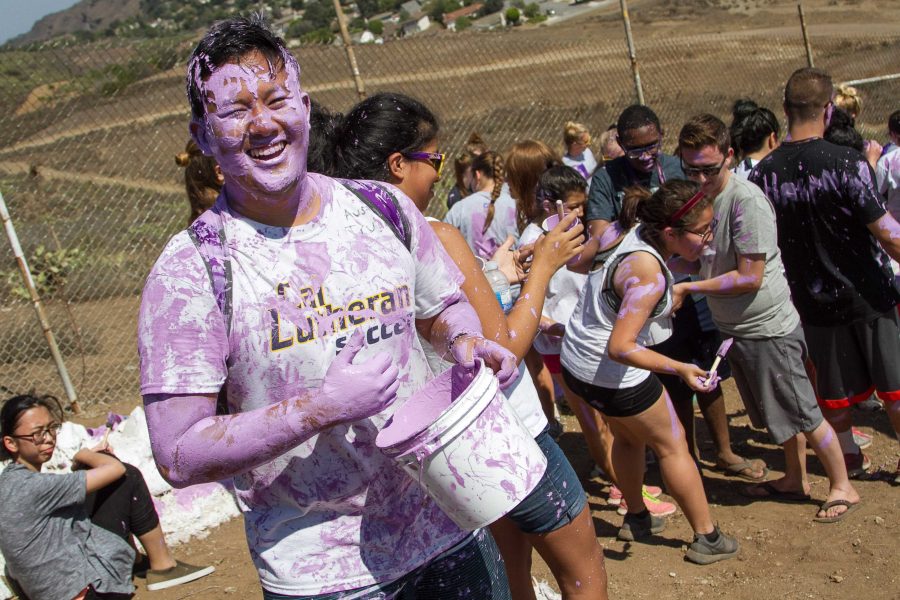 Paint the rocks, not each other: First-year Peer Advisor Austin Truong participates in the annual orientation paint fight at the “CLU” rocks. Photo by Brian Stethem

The beginning of the 2016-2017 school year at California Lutheran University marked a historic event: the largest incoming class, with over 800 students in total.

In addition to the large size of the class, this new body of students is also one of the most diverse, especially given the fact that this group has the highest GPA average in Cal Lutheran history at 3.7.

Michael Elgarico, the Director of Admissions, explained that the influx of students would change the university itself, and that the administrators were learning how to manage a class size that big.

“[The size of the class] is uncharted territory for the university,” Elgarico said. “So,with respect to that, we are in a position where some universities envy in which we have so many students that are interested in coming to Cal Lutheran.”

However, with the rising number of potential admitted students, there are also some concerns that Elgarico raised about being careful to maintain the university’s values with the influx of people who want to attend the school.

“At the same time, it gives us a moment to understand how we accommodate a large incoming class. So we have to be mindful of […] resources, in terms of housing [and] in terms of class availability.”

This rising number of applicants also boasted a wider range of people interested in attending the university, and broadened the horizons of the types of services and ideals that the university is able to supply and show to people.

Jaime Faucher, the Assistant Director of Student Life, was supportive of the increase in diversity within the first years and transfers and the positive impacts that the boosted numbers could have on the university as a whole.

“I think the university is working hard to ensure that everyone has access to higher education,” Faucher said in an email interview.

“This is demonstrated by opening doors to new students that may have otherwise not been able to pursue a bachelor’s degree. I think this is a significant achievement for the university—it proves that we are moving in the right direction. To have so many students wanting to enroll, and a diverse group at that, is noteworthy.”

Faucher also touched upon what the increase in diversity meant to her, with regards to her own family and the importance of the first-year students that were also first-generation college students.

Scott Silverman, Assistant Dean of Students & Director of Student Life, was emphatic in the idea that the process of the new student orientation, the introduction to Cal Lutheran for the transfers and first-year students, was an evolving process, and one that changed over time to fit the needs of the students.

“I think orientation generally, you have to [evolve and change from year to year],” Silverman said. “You can’t just run it the same way every year, because the needs of the students change, and the needs of the campus change and evolve. So, there’s always some room to tinker a little bit.”

He additionally said that the modification process is not only done with new student orientation, but with student affairs all over the campus.

“I think mostly, most programming in Student Life, or just Student Affairs in generally or in campus programming, you have to evolve a little bit because you don’t want to stagnate. Because then, if I was doing it, I wouldn’t want to do the same thing every single year. I want to change it if there’s an opportunity to improve.”