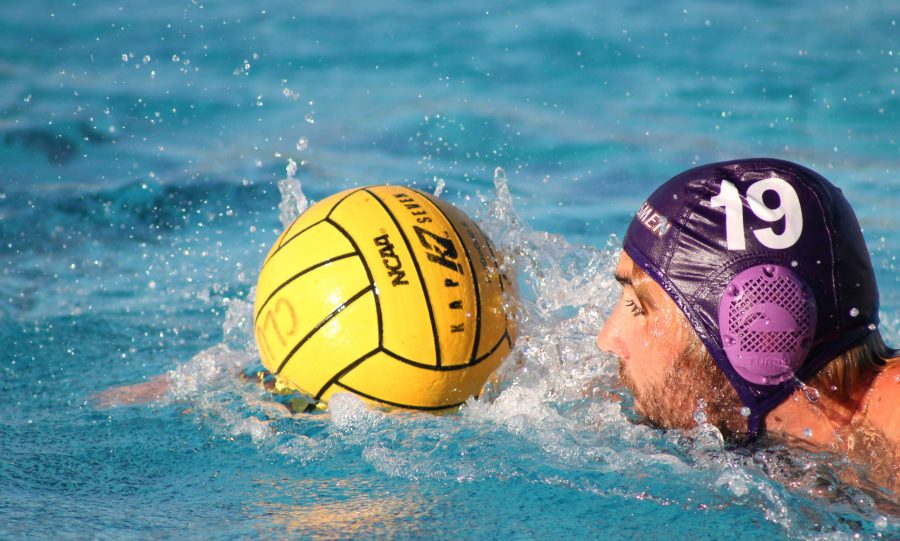 Cameron Hauer swims with the ball to the other side after a foul from UC San Diego. Photo Credit--Kaelani Medina Staff Photographer

The Kingsmen got on the board early in the first period with a goal by sophomore center forward Mats Albins. Junior defender Chris Gardhouse also scored during the first period, putting Cal Lutheran in the lead 2-0. UCSD responded with two quick goals of their own, tying the game 2-2. The teams traded off shots at the goal but both teams played strong defense. The Tritons were able to score a goal in the final minute, making the score 3-2 at the end of the first period.

“I feel like we did a lot of things right but that we also have a lot of things to work on. UC San Diego is one of the top teams in the country,” Gardhouse said. “I think we’ve learned that we can battle through some pretty tough teams and all we need to do is put four quarters together and we should be good.”

“It’s definitely setting the bar, making it so we really know how hard we can push ourselves so once it comes to SCIAC [Southern California Intercollegiate Athletic Conference] teams we should be ready,” junior goalkeeper Nick Loomis said.

The Kingsmen were shut out in the fourth period while the Tritons added five more to the score, putting the final at 6-18 UCSD.

“We just told the guys we have to be more coordinated on offense. I felt like our offense was just scattered today, I don’t think we knew who was doing what. We need to do a better job over the weekend identifying who does what,” Head Coach Craig Rond said. “You have to be pretty good to play this team. They’re a division two school and a high ranked division two school so we wanna play tough teams to work out kinks and get better as a team.”