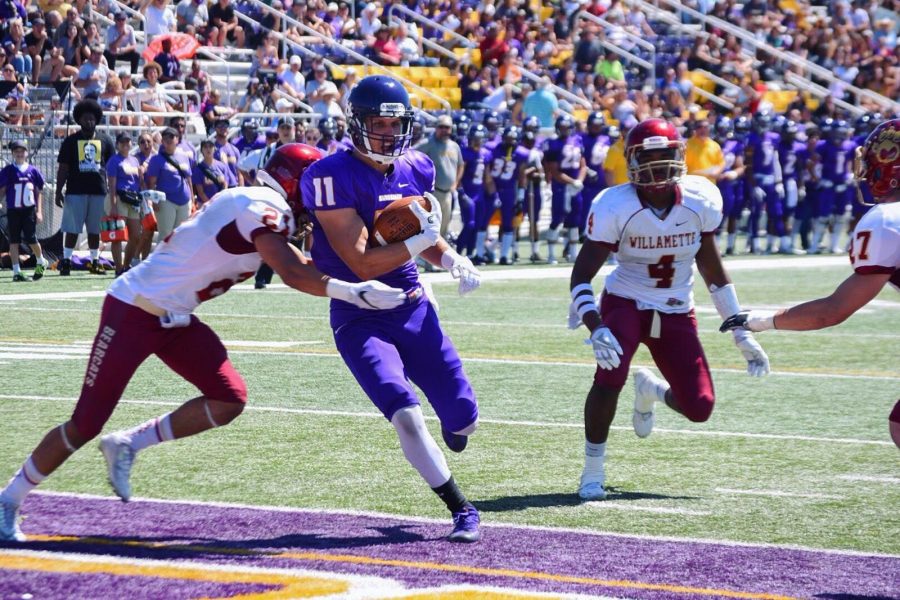 The football teams of California Lutheran University and Willamette University (Ore.) played Sept. 17 at 12 p.m. at William Rolland Stadium. Both teams entered the game looking for their first win of the season.

Cal Lutheran started off strong with a successful 92-yard drive that was capped off with a one-yard rushing touchdown by junior running back Chris Beeson.

The Kingsmen defense came up with a stop on the fourth down to get the ball back early in the second quarter. The offense marched down the field and scored on a 17-yard touchdown pass from junior quarterback Adam Friederichsen to junior wide receiver Aaron Lacombe.

Willamette’s next drive was cut short by an impressive interception by senior linebacker Nathaniel Thompson. This take away put Cal Lutheran in a prime scoring position. Friederichsen hooked up with Lacombe for a 23-yard strike for a touchdown. This gave the Kingsmen a 21-0 lead in the second quarter.

“In the first half we had tremendous energy. We came out making a bunch of plays and picked up a bunch of first downs,” Head Coach Ben McEnroe said. “We were able to sustain drives. For the most part, we were in control.”

Willamette’s offense quickly gained momentum after an interception by junior defensive back Nick Brickous was returned 68-yards to Cal Lutheran’s one-yard line. The Bearcats’ running back Taylor Wyman scored on the next play to make the score 21-7 at the half.

At the end of the third quarter, junior running back Jimmy Sharpe scored to bring Willamette within a touchdown. A solid drive by the Kingsmen early in the fourth quarter led to a field goal to extend their lead to 24-14.

Willamette quickly responded with a four-yard touchdown run by Wyman to bring the score within three points. The Cal Lutheran offense was held in check for the remainder of the game, as they were unable to move the ball effectively.

“It was tough to get things going. We needed a better sense of urgency in every drive that we get and we need to make the most of our opportunities,” Friederichsen said.

Willamette took the lead on a 15-yard pass from junior quarterback Ryan Knowlton to senior wide receiver Alex Israel in the back of the end zone. Cal Lutheran threatened to take the lead back in the dying seconds of the game before being stopped on fourth-and-one, as Friederichsen’s pass fell incomplete on the Willamette 15-yard line. The Bearcats took a knee to run out the clock to claim the 28-24 victory.

“Sometimes things don’t play out in your favor. We just couldn’t keep the ball rolling,” junior Linebacker Trevor Roe said. “But coming into conference, these two losses will help us grow as a team. We’ll be ready for conference, that’s for sure.”

The Kingsmen look to redeem themselves and start their Southern California Intercollegiate Athletic Conference play with La Verne University at home Oct. 1 at 7 p.m.