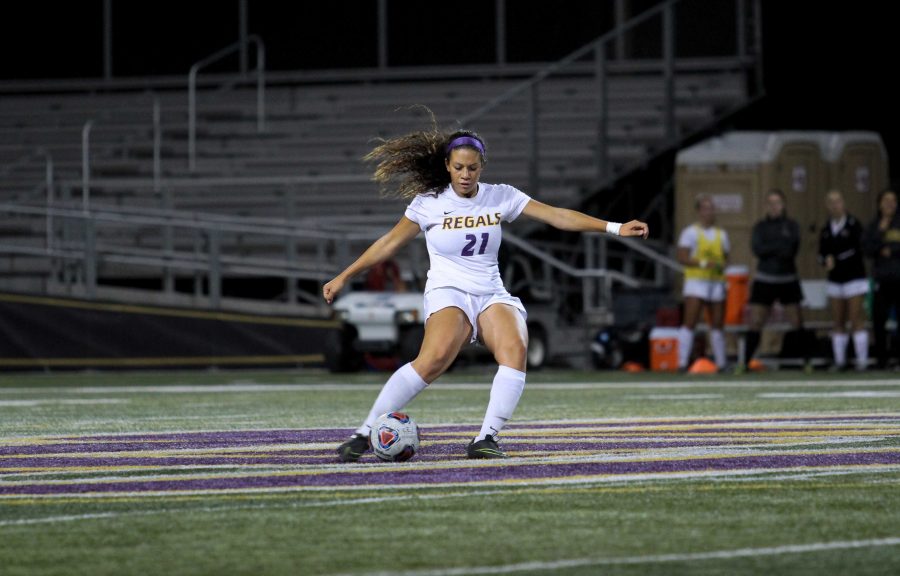 The women’s soccer teams from California Lutheran University and the University of Redlands played a match under the lights at William Rolland Stadium at 7 p.m. Sept. 14. Cal Lutheran would come into the match ranked 17th in the nation by D3soccer.com. The undefeated Regals looked to continue their winning ways after starting 4-0.

The first match in Southern California Intercollegiate Athletic Conference (SCIAC) play for both teams produced some very aggressive play. Tensions were high for the entirety of the match.

The Regals dominated possession of the ball for the majority of the first half. In the 31st minute, Cal Lutheran was awarded a corner kick that produced a break though. Sophomore forward Nikole Prelooker fired a shot after the cross that was saved by Bulldogs goalkeeper Hannah Menk. Fortunately for the Regals, junior forward Kali Youngdahl capitalized on the rebound as she put the ball in the back of the net to give Cal Lutheran a one-goal advantage.

“It was a team effort. We really worked on building up and connecting. We worked really hard and our work ethic speaks for itself on the field,” Youngdahl said. “The energy came for our team and we really played off one another.”

Drama ensued shortly after the first goal of the match. A hard foul in Cal Lutheran’s defensive third of the pitch caused a physical altercation between sophomore defender Riley Martin and Redlands forward Kate Frame. Martin was shown a red card and sent off and Frame was shown a yellow. Head Coach Frank Marino was then ejected from the game for arguing with the referee.

The Regals played down one player and without their head coach for the rest of the match.

With Cal Lutheran at a clear disadvantage, adjustments had to be made to their defense. The defense conceded the equalizing goal in the 47th minute when the Bulldogs’ midfielder Lauren Bay put a shot into the top left corner of the net.

This adversity seemed to inspire the Regals for the remaining minutes of the match. They created a multitude of goal-scoring opportunities shortly after giving up that goal. Sophomore midfielder Sarah Tadeusiak had a solid opportunity when she fired a headed effort on goal. The effort was saved by Menk, but it proved to be a momentum swing in the Regals favor. Youngdahl and sophomore forward Ryley Settles began making runs and connecting on the offensive end.

“Originally we freaked out after being a player down, but then we remembered some drills we’ve done in practice when our defense has six players and our offense has eight. It was something that we were comfortable with and we knew we could do it,” Settles said.

In the 82nd minute, Settles was knocked down during a run on goal and Cal Lutheran was awarded a penalty kick. Youngdahl was chosen to take the penalty and showed great composure as she drove it into the left corner of the net for her second goal of the match. This goal would prove to be the game winner as it solidified the 2-1 result for the Regals.

“I told the team in the huddle that we knew we had a special group, but after what they did today, they just solidified themselves as a very special group,” Assistant Coach Jonathan Decker said. “Every assistant coach was into it and we were relaying and bouncing ideas off each other. This was a team win.”

Providing multiple shots on goal for the Regals were Youndahl with three and Martin with two. Tadeusiak, Prelooker, and senior forward Katelyn Kimball each had one shot on goal. Prelooker also tallied an assist.

Cal Lutheran improved their undefeated record to 5-0 and Redlands fell to 1-3. The next match for the Regals will be Sept. 21 at 4 p.m. at Chapman University.