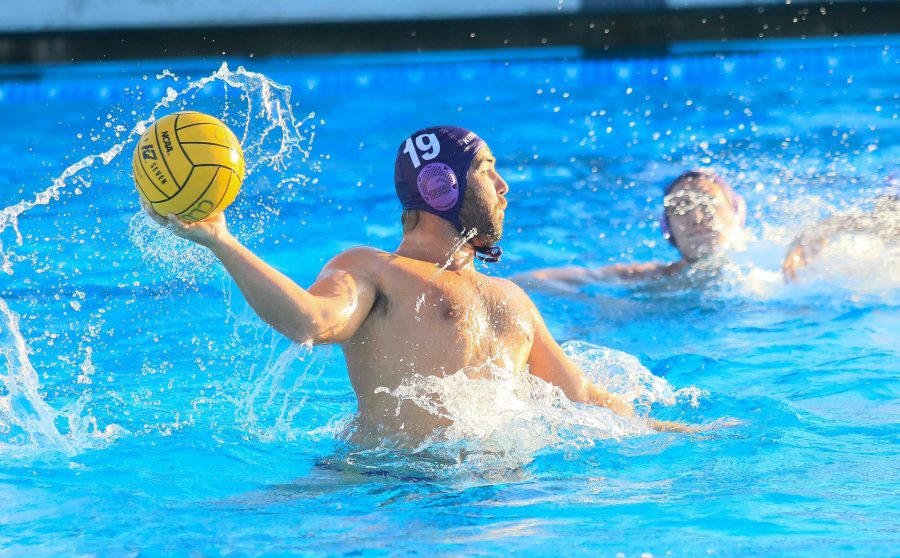 Samuelson Aquatics center was the site Sept. 23 afternoon for the California Lutheran University men’s water polo team as it held its very own Kingsmen Mini Tournament.

The Kingsmen came into this tournament on a high note after their successful trip to the East Coast saw them win all four games. The afternoon began with a game against the Ventura College Pirates, as the Kingsmen were looking to extend their winning streak to five.

The Pirates didn’t pose a threat to the streak as the Kingsmen put on an offensive show scoring 19 goals, which was their third consecutive game of at least 19 goals.

Junior center Chris Gardhouse started the route with the first goal of the day and he didn’t slow down after that as he added three more goals to his name. Nine more kingsmen put their name on the scoresheet, as the Pirates defense couldn’t find an answer for the offensive force shown in the game.

The Kingsmen defense certainly matched the offensive power as they only allowed five goals against the Pirates. Junior goalkeeper Nick Loomis was a wall in front of the goal adding 10 saves.

Head Coach Craig Rond spoke about the team’s shaky start to the game, as they had to deal with the players getting out of class just before the game.

“It was a good game for us,” Rond said. “We wanted to make sure we got some of our supporting cast some good minutes, and that was the goal of that game.”

Ending in a score of 19-5, the Kingsmen were looking forward to their game against Occidental later on that afternoon.

Rond talked about how patience on offense and better communication would be the focus points heading into the second match of the day.

“I’m very excited. They are usually pretty strong contenders in our league. It’s going to be a really exciting match to see how our team does,” senior attacker Zack Card said.

The excitement Card talked about was very evident, as the Kingsmen took down the Tigers with a score of 9-3. The men in violet and gold could have added many more goals if it weren’t for the Occidental goalkeeper Adam Florsheim, who racked up 25 saves.

Four kingsmen saw their name on the scoresheet and four of those came from Junior center George French, who had three goals in the third period alone allowing the Kingsmen to create separation between the two teams going into the end of the game.

Gardhouse was a force once again in the second game, but this time as the one facilitating the goals, adding three more assists to his season tally.

The defense again was an important factor to the Kingsmen’s success as sophomore attacker Matt Fong and French added three steals to tag along with Loomis’ 12 saves.

Closing out the weekend 2-0, the Kingsmen look forward to continuing their winning streak at the Gary Troyer Tournament in Claremont, California where they will face off against Connecticut College and Fresno Pacific at 10:15 a.m. and 4:30 p.m. Oct. 7, respectively. Oct. 8 will show Fordham (N.Y.) at 9:10 a.m. and Concordia at 12:40 p.m.