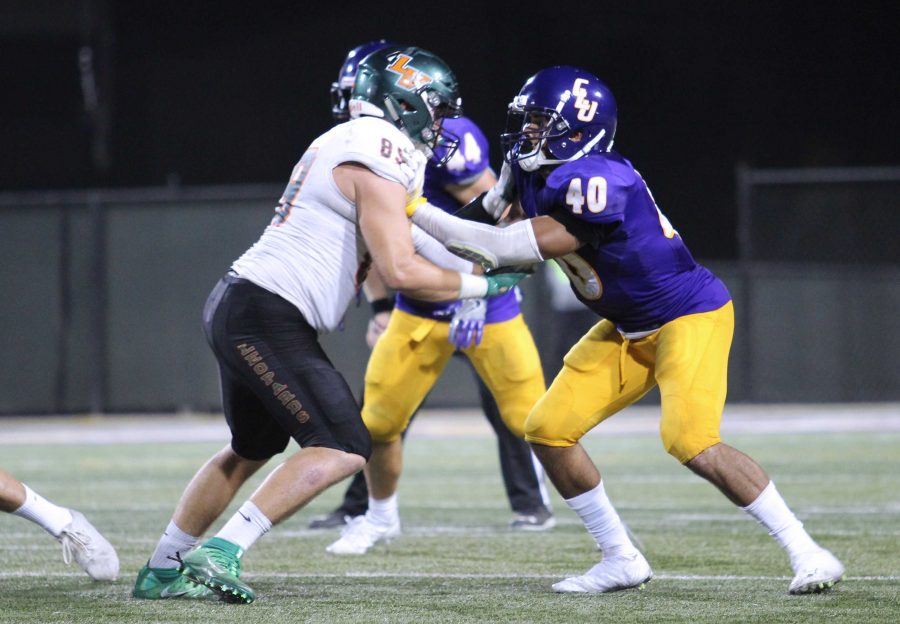 The California Lutheran University football team hosted La Verne Oct. 1 at 7 p.m. at William Rolland Stadium. It marked the first Southern California Intercollegiate Athletic Conference match up of the season for both teams. The Kingsmen put a mark in the win column defeating the Leopards 45-13.

Junior quarterback Adam Friederichsen led the offense with 293 passing yards and 126 rushing yards, but he claims it was the whole unit that helped him put up those numbers.

“The offensive line gave me the most protection all day,” Friederichsen said. “I had all day to throw and that’s what generated us to put up so many points.”

From the first snap of the game Friederichsen was locked in, scoring the first touchdown within two minutes of the start time on a 62-yard pass to junior wide receiver Aaron Lacombe.

La Verne was stopped in its tracks and forced to punt for their first drive of the game. With help from a Leopards face mask penalty, the Kingsmen extended their lead to 14.

Cal Lutheran knocked the ball loose on a hit from sophomore defensive lineman Tyler Hood. The Kingsmen recovered the fumble on the 3-yard line. However, they were unable to convert on downs.

After a long break from anyone finding the end zone, freshman defensive back Jerome Hull created a spark for the Kingsmen by intercepting a pass on the 33-yard line. Friederichsen followed it with a 21-yard pass to junior wide receiver Richard Caceres. The Kingsmen inched forward on a couple of short  runs to score their third touchdown of the game.

La Verne almost scored its first touchdown as the clock reached zero going into the half, but the ball tipped off of the receiver’s hands as he dove for the ball in the end zone.

Going into halftime with score of 21-0, the Kingsmen knew they could not sit back.

“Defense wanted to keep the pressure on them. We knew if we kept getting stops, they were going to have to try to pass the ball and that’s one of our strengths, covering the pass,” senior defensive back Logan Sanders said.

La Verne came out of the locker room ready to go. Dallas Parent broke through several Kingsmen tackles to score on a 67-yard run.

Friederichsen responded with a 51-yard run to set the Kingsmen up for their fourth touchdown of the game. Friederichsen then found junior wide-receiver Wendell O’Brien crossing through the back of the end zone.

After a long drive down the field, La Verne managed to push one across the end zone. They opted to try for a two-point conversion, but failed to complete the pass.

The Kingsmen answered with a quick drive down the field. Friederichsen completed the pass to Lacombe, who finished out the touchdown with a long run down the sideline.

Cal Lutheran started the fourth quarter off with a 48-yard touchdown run by Friederichsen. This brought the score to 45-13, and that score remained until the clock ran out.

Though the Kingsmen offense was full-throttle all game long, Head Coach Ben McEnroe believed the defense deserved just as much credit.

“Every guy that played defense for us tonight stood out to me,” McEnroe said. “For our defense to do what they did, that was their night.”

The statistics back it up too. Defensively, the Violet and Gold forced six sacks combining for a loss of 37 yards, forced three fumbles and came away with an interception.

As the Kingsmen close the book on their first SCIAC contest, McEnroe looked forward to the upcoming week of practices and, ultimately, the future, as he believes this young team has just begun to scratch the surface.

For the players, Friederichsen and Sanders plan on taking it one game at a time. Their team focus is to be 1-0 every week, and they did just that against the Leopards.