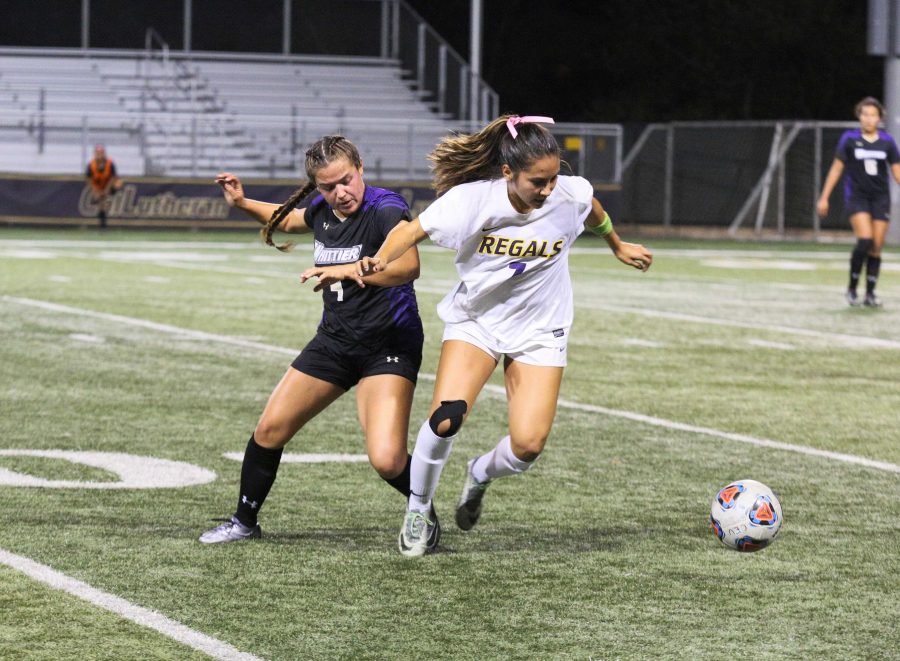 The Regals soccer team of California Lutheran University hosted the Poets of Whittier College at William Rolland Stadium Oct. 5 at 7 p.m. After battling on the pitch for 110 minutes, the squads proved to be evenly matched in the 1-1 draw.

Cal Lutheran got started early on the attack when junior midfielder Sarah Wardle fired a shot on goal in the 2nd minute. The Regals threatened again in the 15th minute when sophomore defender Riley Martin delivered a phenomenal cross that junior forward Kali Youngdahl headed just over the crossbar.

“I think we played well for a good portion of the game, but there were spurts we didn’t play as well as we could have,” Head Coach Frank Marino said. “I’m still happy with how we played, but I’m not thrilled with the result. That’s not really what we were looking for.”

The rest of the first half included a multitude of fouls from both sides in a physical match. The Regals had another opportunity on a corner kick in the 32nd minute but they were unable to convert. The teams went into the second half with the score tied 0-0.

Cal Lutheran provided the first goal of the match in the 63rd minute when Martin whipped in a cross from a corner kick and senior defender Julia Kearns headed it into the back of the net. This gave the Regals a 1-0 advantage.

“We’ve been working on set plays and getting on the end of corners. We have a really specific drill just to work on heading,” Kearns said. “I’ve gotten a lot better at it. This season I decided to get in there and it finally paid off.”

Shortly after conceding this goal, Whittier started moving the ball well in the attacking third of the pitch when they won a free kick within striking distance. They scored the equalizing goal on a header from junior forward Leila Afrasiyabi after a delivery from freshman defender Jennifer Muise.

A violent foul by freshman defender Clarissa Terris of the Poets produced a physical altercation in the 75th minute. Terris was shown a yellow card for her involvement in the altercation. This scuffle would incite some very aggressive play for the remainder of the match. The teams together had combined for a total of 33 fouls in the match.

Senior forward Katelyn Kimball picked up a yellow card of her own in the 79th minute after shoving an opposing player. Sophomore midfielder Sarah Tadeusiak also earned herself a yellow card in the final minute of the game.

Neither team was able to produce any clear-cut scoring opportunities in either of the two overtimes. The best opportunity for the Regals came on a bouncing ball in the penalty box in the dying seconds of the match, but they were unable to capitalize.

“I think, besides the one set piece, we played phenomenally. All they could do was get shots outside of the 18-yard box so I think we did our job as defenders,” junior defender Olivia Leyva said. “We left it all out on the field. I have no regrets.”

Cal Lutheran’s next match will be Oct. 12 at 7 p.m. inside William Rolland Stadium as they take on the Athenas of Claremont-Mudd-Scipps.