Regals Stifle Athenas in Battle for the Top Spot 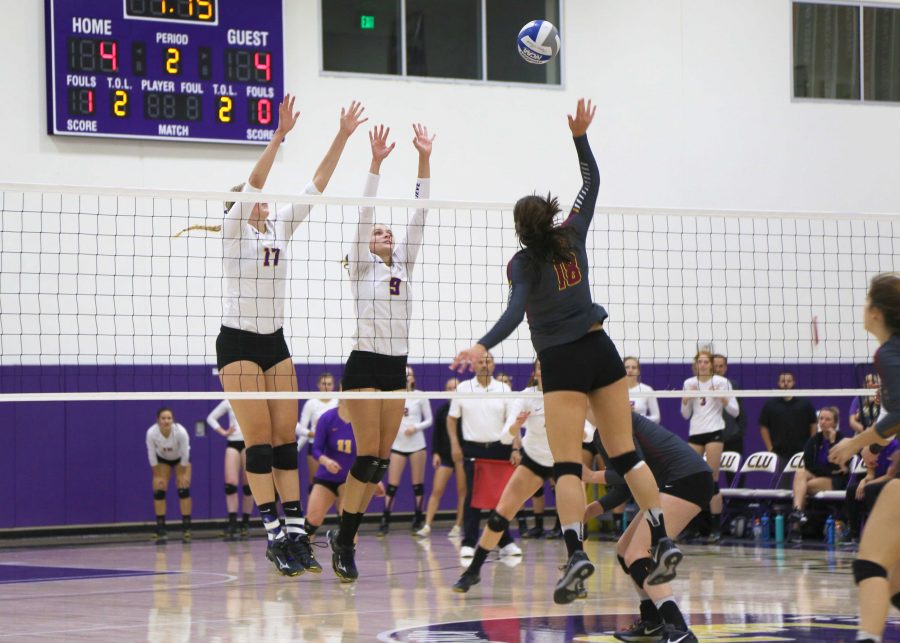 On Oct. 21 the No. 5 California Lutheran University Regals faced off against No. 2 Claremont-Mudd-Scripps in a Southern California Intercollegiate Athletic Conference thriller of a match. These two teams met previously this season in which the Regals lost 3-1 to CMS. The Regals swept the Athenas 3-0 (25-16, 25-23, 25-18) at home.

“I think tonight everyone played out of their mind I thought the defense was awesome and the passing, the serving, the hitting and the blocking were great. We just flowed tonight and I couldn’t be happier with the team,” senior libero Nicki Tetherow said.

This win puts the Regals in a tie with La Verne for the top spot in SCIAC.

The crowd in Gilbert Arena was behind the Regals every second of this game. Tetherow explained that the crowd was a factor in the win that night.

“Just having everyone here and having our back it’s really awesome on the court as well, knowing that everyone is behind you so the win definitely goes to them. It’s dedicated to the fans for sure,” Tetherow said.

The Regals started the first set strong scoring the first two points and taking an early lead. The Athenas battled back and tied the game 4-4 early on but the Regals’ lead was too big. Cal Lutheran went on a 5-0 run to win the first set 25-16.

For Head Coach Kellee Roesel, the focus in the game was the defense.

“We wanted to make sure we were playing the right defense against them, I can’t say enough about Claremont and their coaching staff, I love those guys and they’re really good,” Roesel said. “You don’t get ranked number two in the nation if you’re not very good so we worked a lot on our blocking and our back row defense and the basics of serving and passing.”

The second set proved to be more difficult than the first with the two teams trading points throughout the set. The Regals  scored first again but this set featured multiple lead changes between the teams. With the game tied 23-23, Cal Lutheran was able to score the last two points of the set putting them up 2-0.

“We really just talked about making sure we went into the third match like it was the beginning of the game, we have to start fresh, the past two sets didn’t matter, nothing happened. We just needed to play like it was our first game,” junior outside hitter Hope Stewart said.

In the final set of the game, the Regals started off behind at 3-1 and had to play from behind most of the game.  Cal Lutheran’s defense was able to keep the Athenas’ lead narrow enough to let the offense close the gap to 15 all. The teams then traded points until the Regals went on an eight to one run to finish off the Athenas 25-18.

“I’m really proud of the kids, we kept facing adversity and they just kept believing in themselves and playing really well at the right times. I’m incredibly proud of them,” Roesel said.

Stewart led the Regals with 13 points, 13 kills and eight digs. Tetherow added 13 digs of her own, and senior outside hitter Michelle Lawrence had 12 points and 11 kills.

Cal Lutheran will host the University of La Verne Oct. 25 at 7 p.m. for the last home game of the regular season and battle for the top spot in SCIAC.