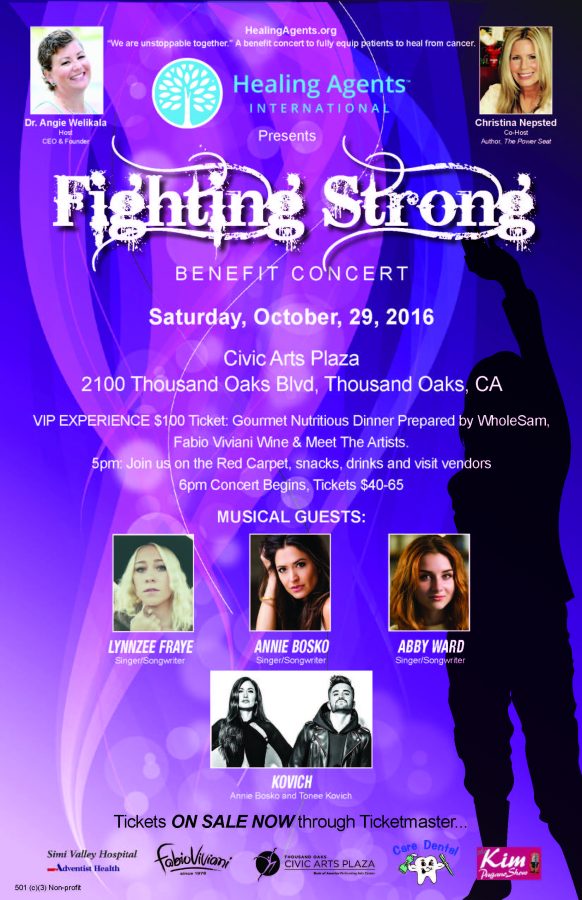 Healing Agents International will be “fighting strong” with a benefit concert Saturday, Oct. 29 at 6 – 9 p.m. at the Thousand Oaks Civic Arts Plaza. It will feature artists such as Abby Ward, Kovich, Lynnzee Fraye and country headliner Annie Bosko.

“Healing Agents is a product of my two-time cancerous journey. It really came out of my own search to find all the treatments that are available,” Welikala said.

In 2010, Welikala had stage zero breast cancer, which later returned and metastasized to her spine. After surviving what became stage four breast cancer, she sees herself as a miracle, refusing to waste anymore time and paying it forward as long as she can. This attitude is certainly lived out through her organization dedicated to those experiencing what she endured not long ago.

Founded just a year and a half ago, Healing Agents International has formed an approach to curing cancer that is different from the average organization, combining integrative and conventional techniques, Welikala said.

“My whole vision is creating a healing agents circle around each cancer patient and their families,” Welikala said.

This even incorporates the spiritual aspect of healing, open to all religions, Welikala said.

The organization has a local and national reach, with Healing Agents International both finding families to support or having families reach out to them for assistance.

Welikala said the goal is to have chapters across the country, and to ultimately “help others heal.”

Attending the concert will help fund the launch of a cancer-fighting meal service with nutritional, wholesome foods, webinars, and even a prayer team.

California Lutheran University alumni Katelyn Downing, a volunteer reaching out for sponsorships and donations and acting as Welikala’s “right-hand woman,” said, “Healing Agents really walks with them along the process…I just haven’t seen something like this before.”

Their efforts can even include helping find laughter and sending a funny card, Welikala said.

On the process of planning the concert, Welikala said the standard runs and walks to raise money for fighting cancer did not match her vision. Instead, she said she “just wanted to do something that was really positive, and a night of celebration of life and hope and past stories.”

Country artist Annie Bosko said she met “Dr. Angie” through a mutual friend who knew of her song “Fighter” and thought it was perfect for the concert’s theme, “Fighting Strong.” Bosko said she immediately loved the organization and its approach of incorporating all the medical worlds into a comprehensive treatment plan.

Things to look forward to at the event include a pre-concert VIP dinner at 5 p.m. featuring healthy dining and a meet and greet with the artists. The concert will also feature a silent auction, which Downing said will be creatively done through an app that can notify people as bids occur.

Items up for auction include a $5,000 pair of earrings and what Welikala called the biggest baskets she has ever seen, going up to $1,000 in value. Donations have come from groups including Lululemon Athletica, UCLA Health, Sprouts and The Lazy Dog Restaurant and Bar.

Tickets are $44, or $69 to be in the front section, while the VIP dinner is an additional $100 donation. The goal is to earn $100,000 from the event, but Welikala said their organization will be incredibly blessed no matter the amount.

Welikala said Healing Agents International will be back at the Thousand Oaks Civic Arts Plaza Oct. 21, 2017.

“Just come, have an amazing night of fun and entertainment and be able to bless a family in need at the same time,” Welikala said. 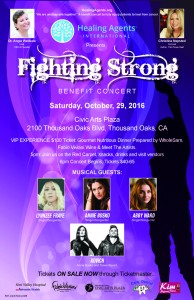