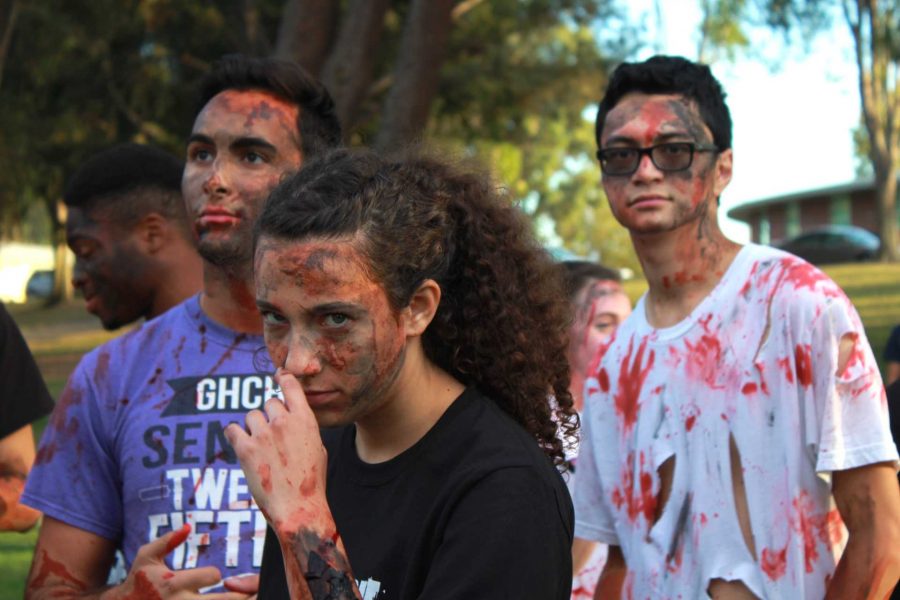 Marathon of the living dead: Sophomore Ramsey Khader, sophomore Alison Yurk and senior Keanu Quick get into their zombie characters complete with bloody make-up prior to the run.

As Halloween nears, zombies found their way onto the California Lutheran University campus. October is Breast Cancer Awareness Month and students have found a way to show their support.

On Oct. 22, starting at 5:30 p.m., students participated in the “Cal Lu Zombie Run” at Kingsmen Park. This event was a fundraiser to spread breast cancer awareness.

Sixty-two students participated in the event and arrived ready to run from zombies. The first 50 students to arrive at the event were awarded T-shirts promoting the “Cal Lu Zombie Run.”

The lighthearted scene involved music, water and snacks to start the event. Students as well as volunteer zombies paid $10 to participate in the run and all money accumulated will be donated to The National Breast Cancer Foundation. The event was created by the Resident Assistants from Mt. Clef Hall and was a part of the “RA Promoted Events’ series.”

“Our Mt. Clef staff created this program for the whole campus,” Resident Assistant Marissa Chavira said. “The course goes all throughout the school and the object is for runners to make it through the course without getting marked by a zombie.”

The mile and a half course featured Resident Assistants who acted as zombies and chased runners as they ran. This gave runners incentive to run rather than walk at the event. Zombies tried to mark runners while the runners attempted to finish the course unmarked by zombies.

Zombies wore dark clothing and painted their faces to appear as spooky as possible on the course. The runners ran in packs to fend off zombies in their attempt to finish the course unscathed. This created a social aspect during the zombie run, as runners were encouraged to meet new people. The event also featured students from all classes and was not limited to first-year students who live in Mt. Clef.

“I’m a very big supporter in finding a cure for cancer,” said freshman Ian Johnson who participated in the zombie run. “I also love to run and running away from zombies is a big plus. You have to find people to run with so it’s all around a fun way to meet new people.”

Signs were placed throughout the course so runners had an idea of how far they had progressed. Zombies showed their Halloween spirit as they attempted to spook runners on their journey. The sun started to set just as the runners took off which produced a dark scene for the event.

“Our main goal is to raise money because this is a fundraiser event,” Reyes said. “All proceeds honestly go to the National Breast Cancer Foundation fund. [The event] helps make people aware of  how easy it is to give back to the community especially since it’s Breast Cancer Awareness Month. We really wanted to implement that into our event.”

This was the first time this event has taken place on the Cal Lutheran campus. Reyes hopes to continue participating in events similar to the “Cal Lu Zombie Run” and give back to the community.