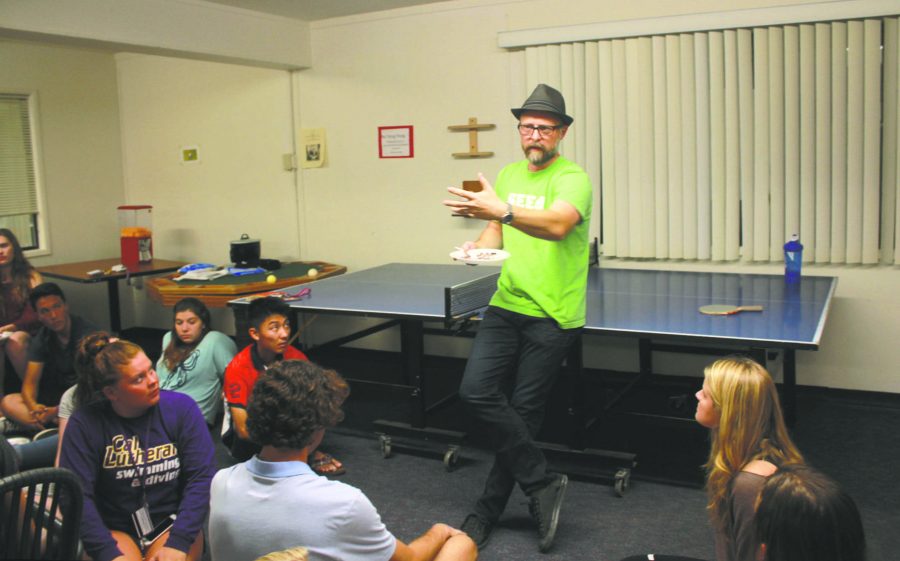 Poverty Local and Global: Samuel Thomas speaks out about the difference between charity and justice. Charity is a quick-fix. Justice is understanding the underlying problems and working to fix them. Photos by Clara Berks- Staff Photographer

According to The Hub, the event was meant to provide a meal to all who attended that was to simulate the disparity between wealth and poverty, and how that affected people all over the world can eat.

When the event started, RAs from Pederson Hall read off information about people from all over the world, such as how little or much they’re able to eat, depending on where they are from and what their income status is.

Light thought of this event not as an intervention of the habits that students and people have, but as raising awareness that there is still hunger disparity, even in the United States.

When the guests of the event walked into the room, they were randomly given a small piece of paper with a phone number that they could text that correlated to a specific character, as well as serving to tell the guests what income status they were, between high, middle and low income.

Thomas spoke about what the Hunger Banquet actually was, and what it was meant to represent for this event.

“So, the purpose of the Hunger Banquet is to call attention to global poverty and hunger, but also to call attention to the fact that poverty and hunger are intermixed, and they exist within the context of the United States, and within the context of Ventura County, and in our cities, in our neighborhoods,” Thomas said. “And sometimes, very often, hunger is invisible to those who don’t experience it.”

Once everyone was seated in their specific zones, they were each told what they could eat from the banquet. The people with the highest income were able to eat any of the food on the table, which included rice, beans, chicken, grapes, pumpkin pie, as well as having the option of having seasonings and napkins with their food.

The guests in the middle income section could only have rice, beans and chicken, without having access to grapes, pie, seasonings and napkins.

Finally, the visitors who were in the lowest income group could only have rice and beans; however, by the time Thomas, the last person in the low income line, was able to get to the food, he was only able to have four individual beans.

Marissa Chavira, who attended the Hunger Banquet and is also an RA in Mt. Clef Hall, was in the highest income class in this simulation, and she noticed how Thomas only got four individual beans.

“I think for me, too, I saw it coming from the high income standard, or point of view, I saw it as they were getting my leftovers,” Chavira said. “Like, [my friend and I] could have whatever we want, but then [Thomas] made the point like he had four beans on his plate because he was one of the last people to be fed.”

Chavira also talked about how the simulation really put the emphasis on giving the people in the highest income class the best options for food, and then leaving the middle and lower income class to pick up their scraps.

“For example, when we got up to eat, I asked one of the girls if she could grab grapes for me, because I hadn’t washed my hands and I didn’t want to grab a large amount, and she grabbed a huge bunch, and she was like ‘Oh, take all of them,’ and I was like ‘No, I feel bad,’ and she was like ‘Well, you’re high income,’ and she just threw it on the plate,” Chavira said.

The Hunger Banquet aimed to educate Cal Lutheran students on the differences between charity and justice. Emphasizing that in order to face local and global poverty problems need to be fixed at the source.