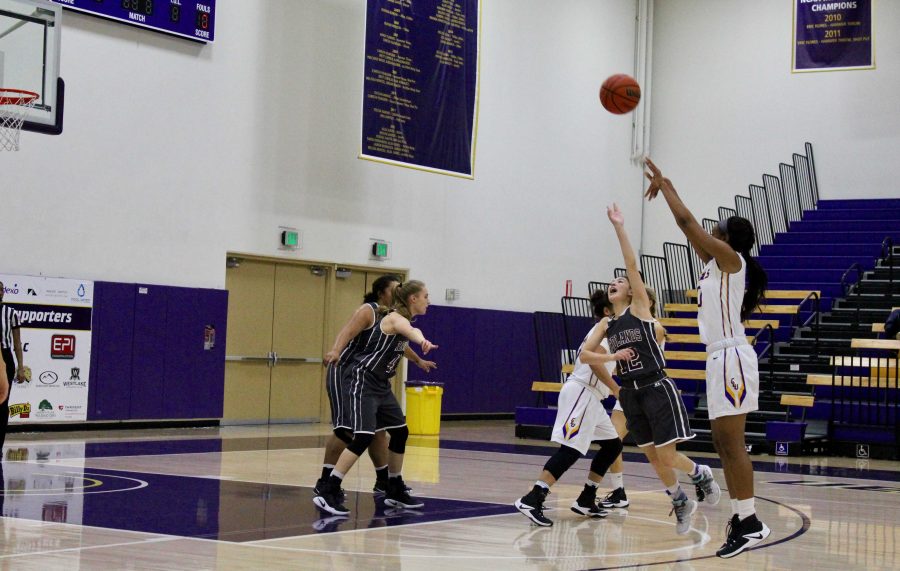 Senior Janelle Porter puts up a three to help extend the Regals score in their victory against Redlands Jan. 23. Adrian Francis--Staff Photographer

The California Lutheran University women’s basketball team remains on top in the first round of the Southern California Intercollegiate Athletic Conference after beating Redlands 87-86 in a neck and neck battle Jan. 23.

With a slow start in the first half, the Regals could not stop the Bulldogs from scoring baskets. Even with defensive rebounds by Regals’ senior forward Haley Hodgson, who had a game high of 12 rebounds, and back-to-back steals by both senior guards Jessica Salottolo and Janelle Porter, the Regals could not match Redlands.

With two minutes left in the second quarter, Porter attempted a bank shot but was blocked by Redlands. Ready for her comeback, Porter ran down the court to steal the ball back from the Redlands offense and drove to the basket for an open layup, creeping closer to the Redlands’ score 39-31.

“I know I had to make that up because my team is counting on me and I’m counting on them to score the basket so that’s what pumped me up to get those steals and make the basket,” Porter said.

With a lack of defense and wide open looks to the basket, the Bulldogs were able to end the first half with a 42-34 lead over the Regals.

“Our game plan was we wanted them to shoot the ball more then to drive to the basket, because typically they don’t shoot the ball that well,” Head Coach Lindsay Goldblatt said.

Goldblatt said Redlands only averages about 62 points a game, so the Bulldogs knocked down baskets that they don’t typically make.

Coming into the second half with more intensity and adjustments defensively, the Regals came out to win. With back-to-back scoring by both teams, the Regals were finally able to stop the Bulldogs from scoring, while their shots continued to fall.

“They were shooting very well from the floor, so we just knew that we had to start getting stops and play better defense,” said Hodgson, second-time SCIAC Athlete of the Week.

With 9:19 remaining in the fourth quarter, Salottolo quickly pulled up for a jump shot at the top of the key to take the Regals’ first lead in the second half from the Bulldogs. Salottolo led the team in scoring with 25 points.

At 32 seconds left of the game, Redlands’ freshman guard Cassandra Lacey scored a jump shot to tie the score with the Regals at 84.

Without hesitation, Porter answered back and saw an open route down the middle of the key. She drove the ball into the key, scored and got the and-one. After making her free throw, Cal Lutheran stayed on top with the score at 87-84. Porter ended the game with a career-high 22 points.

With only 16 seconds left in the game, the Bulldogs scored another jump shot making the game more intense with the score at 87-86. After two attempts by the Bulldogs to score a layup, the Regals ended the Bulldogs’ shooting streak and closed the game with the W, 87-86.

The Regals are now looking for revenge in the next game against Chapman who beat them by two points in the last second Jan. 21. The Regals will travel to Chapman Jan. 28 at 2 p.m. to face the Panthers for a second time.

“This time around we are going to get on them early and finish the game,” Porter said.