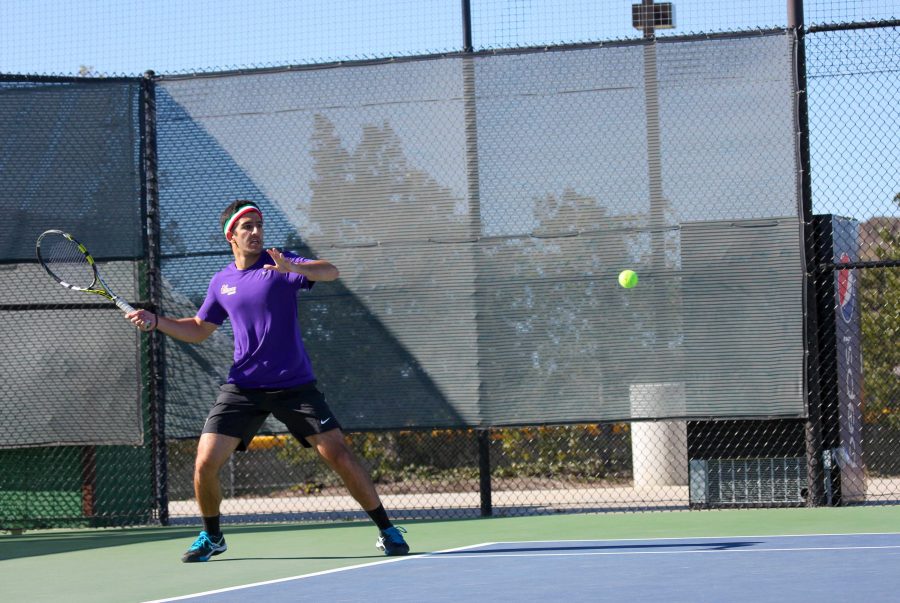 In singles, Braaten won his match 6-0, 7-5 at court No. 2 and provided Cal Lutheran its one point for the match.

The Kingsmen steadily improved as their second match of the day occurred against Cyprus CC but were outlasted 6-3 in another non-conference matchup.

In doubles, the Kingsmen pairing of Sulahian and junior Andrew Tufenkian won its match 8-2 at court No. 3 and earned Cal Lutheran its first point.

The other matches concluded with Kashani and Braaten falling 8-2 at court No. 1 while Tilly and Haffner also lost 8-4 at court No. 2.

Cyprus sealed the deal after winning those four straight singles matches, but the end of the evening showed a bright future for the Violet and Gold.

“In the second match, Tilly, he had a good, clutch performance there with a 7-6 with four points in tiebreak, 7-5 win,” Gennette said.

“I thought Jake had a good competitive match at No. 4, 6-2, 7-6, and then he ended up winning in the afternoon match, so Jake had a pretty good day. He’s one of our stronger freshman,” Gennette said.

The final match of the night ended in dramatic fashion as both teams gathered to watch in anticipation. Haffner came back after losing the first set with a 2-6 and won the second set tiebreaker 7-6 , with three points in tiebreak and then capped off the match with a 10-5 tiebreaker.

“Well it was a tough one. I wasn’t playing my best to start off, but the coaches really helped.  I kind of pulled it together and got a good strategy so I pulled it out. It was a tough one, it was a long one, so I’m really happy I did,” Haffner said.

Cal Lutheran will be back at Poulson Tennis Center to take on Pomona-Pitzer Feb. 11 at 10 a.m.