Leopards and Vikings Too Much For Regals 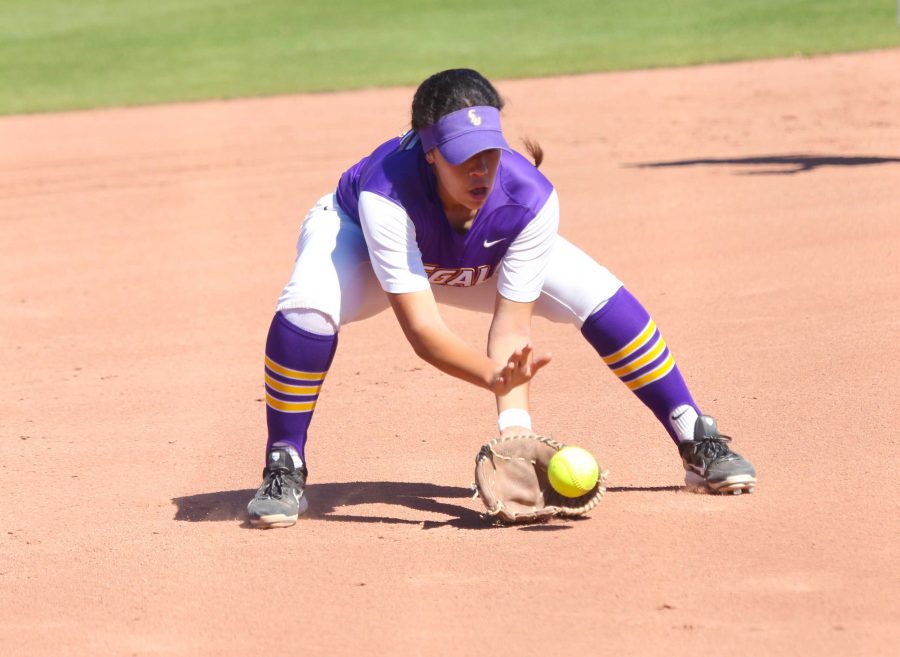 It was a tough weekend for California Lutheran University’s softball team, as the Regals lost four straight games.

On March 10, the Regals traveled to the University of La Verne to face the Southern California Intercollegiate Athletic Conference rival Leopards.

La Verne swept Cal Lutheran 6-4 and 2-5, despite the Leopards’ four errors in the first game and the Regals outhitting La Verne in the second.

The Leopards struck first in the series, with a single run in the first, but the Regals fired back in the second inning with a double by junior third baseman Olivia Leyva to tie the score 1-1.

La Verne’s Justice Borden homered in the third, bringing in three more runs for the Leopards, but again, the Regals’ countered in the top of the fourth and tied the score 4-4. The two teams battled until the end, but La Verne pulled through with the victory in the bottom of the seventh with the final score reading 6-4.

“I think we did a good job at staying in the game the whole time,” senior designated player Emily Manwell said. “I know we faced some tough losses against La Verne last year and the years prior, and this year we came out with the mentality that we were going to be a threat to them. We played really well against a team that’s going to be ranked top two in the conference.”

The Regals didn’t have much time to reflect on Saturday’s games as they hosted the National Fastpitch Coaches Association No. 4 Berry College. The Vikings decimated the Regals at home with a pair of shut outs, 14-0 and 12-0.

The Vikings proved why they are one of the top teams in the country as they outhit Cal Lutheran 25-5 in the double-header March 11, holding the Regals to five innings in both games.

“Berry showed us how softball can be played. They were always going for the extra base and everything like that. We need to be looking to take that next step and this can elevate us to that next level,” Farley said. “It was a good game and it wasn’t anything that we should be hanging our heads about. We learned a lot from them and it’s only going to help us improve. Our goal is to make it to the postseason and we know exactly what the postseason looks like now.”

Senior pitcher Courtney Sooy was first to take the mound against Berry. The visitors were physical and offensively aggressive, as they tallied 11 runs in the first three innings at Hutton Field. Senior pitcher Nicole White-Madolora took over pitching responsibilities in the top of the fourth inning and held the Vikings off the board in the final inning, with the final score of 14-0.

Freshman right fielder Catherine Slabaugh went 2-4 on Sunday and junior second baseman Mikaela Mayhew followed with a single, both earning the first hits for Cal Lutheran against the Vikings.

The Regals found themselves in scoring positions on numerous occasions, but were unable to capitalize and bring runners home to avoid the shut outs.

“They were no slouch of a team, by any means,” sophomore pitcher Alyssa Anderson said. “We tensed up, and obviously when you’re playing a team who’s that good and that put together, it’s bound to happen. We needed to find our own groove and not let them control the game in any way.”

The second game resembled much of the first as the Vikings again came out swinging, earning nine runs in the first four innings. Freshman pitcher Sierra Scali relieved freshman pitcher Olivia Serrano in the top of the fifth inning, making her debut on the mound.

In the bottom of the fifth, Anderson and Manwell recorded the only two hits of the second game against Berry and Cal Lutheran again found themselves knocking on the door with runners in scoring positions and the bases loaded.

“We want our girls to put the ball in play and to force the other team to make the play, so that last inning we’re very happy that everyone was starting to hit the ball. We got a couple subs in who stepped up to the plate right away and gave us some hits,” Farley said. “That’s exactly what we needed to do. We proved that we can do it. We can hit against those girls who are top in the nation. It’s just a matter of finding that consistency.”

Despite four consecutive losses, the Regals were confident they will bounce back and learn from the games.

“It gave us a lot of opportunities to improve,” Manwell said. “It showed us what we needed to work on, because they capitalized on our mistakes. Going into this week’s practice and preparing for this weekend’s games, it gives us an idea of what we need to focus on.”