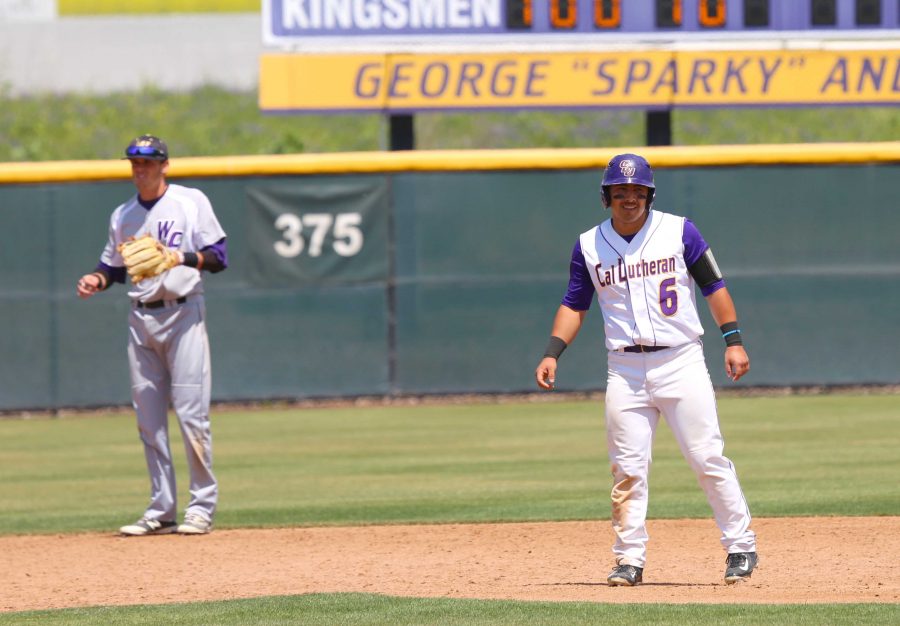 The California Lutheran University Kingsmen baseball team expanded their winning streak to 14 after sweeping the Whittier Poets April 7 and 8.

The first game of the series took the Kingsmen to Whittier to play only seven innings against the Poets. Cal Lutheran started off hot in the top of the first, plating four runs off the bats of seven Kingsmen with the first three pitches of the game being hits.

Doubles by senior right fielder Gabe Gunter and sophomore first baseman Weston Clark brought in two of the runs with senior third baseman Jimmy Jauregui adding a single and RBI as well. Senior outfielder Brad Fullerton brought in the fourth run of the inning with a sacrifice fly to deep center field.

The Kingsmen blew the game open in the fifth inning scoring another four spot making the score 9-1. The Poets were able to put up a lone run in the bottom of the sixth to match the Kingsmen’s run in the top of the inning.

The Violet and Gold finished the game strong by scoring three more runs in the top of the seventh off the bats of senior short stop Austin Kay, junior second baseman Max Weinstein and senior outfielder Sinjin Todd. The game finished two innings early with a Kingsmen run-ruling the Poets 13-3.

Senior pitcher Marshall Paustch rode the wave the whole way on the mound for the Kingsmen getting a complete game win with seven strikeouts and three earned runs.

The double-header April 8 was much closer for the Kingsmen. They were able to pull out two wins 5-1 and 7-4 on the day.

Junior pitcher Nate Wehner pitched a gem going a full nine for the second week in a row. Wehner was able to hold the Poets to just one run in the top of the first.

The Kingsmen bounced back and scored one of their own in the bottom of the inning off the bat of Jauregui.

Cal Lutheran put up a three spot in the bottom of the seventh inning with Weinstein hitting a two-run homerun to right center. With the help of a Poet error and timely hitting, the third run came from Fullerton. The Kingsmen closed the game out in nine innings, 5-1.

The last game of the series was another come-from-behind win. The Kingsmen were unable to score until the bottom of the fifth inning when four runs came across the plate to tie up the game.

It started with senior catcher Eddie Villegas getting on base after being hit by a pitch and Kay followed with a single. Weinstein was able to come up and single to score Villegas and move Kay to third.

Todd then doubled in the right field gap and was able to advance to third on an error, clearing the bases for the Kingsmen and grabbing two RBIs. Todd scored the go ahead run after Gunter hit a sac fly to left field.

The Kingsmen secured their 14th win in a row after Saturday and will have a bye this week from conference play. Instead they will travel to Tacoma, Washington to take on University of Puget Sound April 13 at 3 p.m. They will also take on Pacific Lutheran University for a three-game series April 14 at 11 a.m. and 2 p.m. and April 15 at 11 a.m.