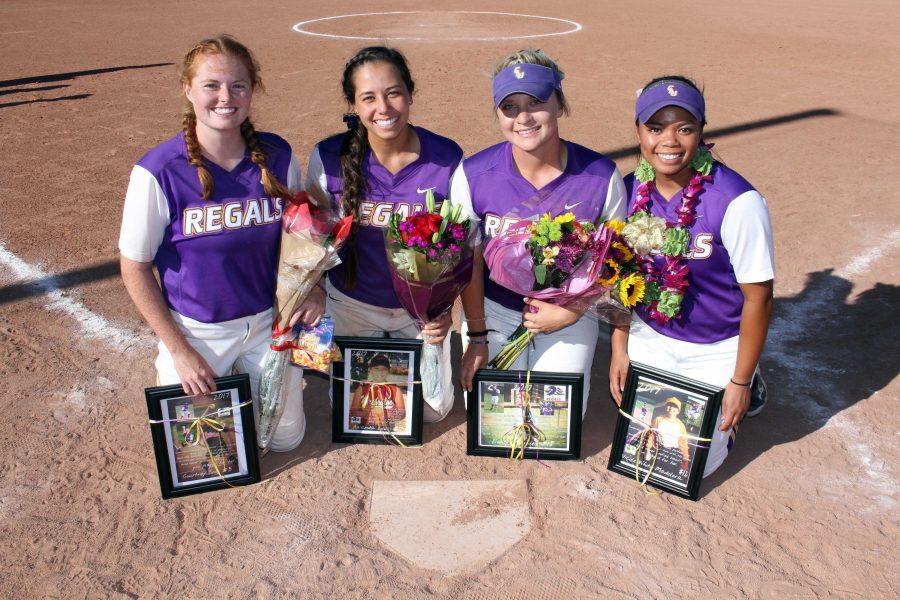 Seniors Courtney Sooy, Amanda Lewis, Nicole White-Madolora and Emily Manwell said farewell to the regular season as they faced off against Claremont-Mudd-Scripps and Pomona-Pitzer on the weekend of April 28 and 29.

They began the weekend with two away games at CMS, both being crucial in their search for the final playoff spot.

Assistant Coach Dave Demaio described the seniors as, “the anchor and the backbone” and said that he would miss “their competitiveness and their willingness to do whatever to get better and they are just good kids. They are good people.”

Game one of the away series was completely controlled by CMS. In a game that only went five innings, the Regals couldn’t get going offensively, and the Athenas came out on top 9-0.

Game two was a different story for the Regals as freshman pitcher Olivia Serrano threw a 10-inning complete game, allowing only one run off of six hits.

The Regals were able to get the early lead after Sooy hit a sac fly to left field, allowing junior shortstop Antonia Rapisardi to get home in the top of the first.

The game was tied up in the bottom of the third after a single up the middle brought in the CMS runner. The game remained tied until extras where junior second baseman Mikaela Mayhew singled through the right side, bringing in freshman outfielder Catherine Slabaugh to get the go-ahead run in the top of the 10th inning. The Regals held off the Athenas and took the game 2-1.

The Regals returned home to host Pomona-Pitzer at Hutton Field on senior day the next day.

Sooy, Lewis, Manwell and White-Madolora all spoke about what they would miss most and they all had the same answer: the team.

“I always look forward to coming out to practice every day. Having fun with them, laughing. It’s fun playing the game, but it’s always the moments in between that you enjoy,” Lewis said.

Lewis said she plans to go to nursing school. She will do her pre-requiste at Moorpark College and then apply to schools in hopes of later becoming a neo-natal nurse.

Game one April 29 saw its first runs in the top of the third after Pomona was able to bring in two runners after back-to-back singles to the outfield.

The Regals soon answered in the bottom of the inning after Sooy hit a sacrifice line out to bring in junior outfielder Jacy Watanabe, cutting the score in half, making it 2-1 in favor of Pomona.

The Sagehens tacked on one more run in the top of the fourth taking their lead again to two. The Regals answered by getting one run of their own in the bottom of the fourth after Rapisardi scored from an infield line out off the bat of junior first baseman Makenna Pellerin. The final score was 3-2 in favor of the Sagehens.

“We just have to take better at bats, have better approaches and basically just get on top of the ball,” Assistant Coach Jason Gluckman said.

The Regals were in a must-win position in the final game of the regular season. After a scoreless first, the Regals got a run on the board after Rapisardi singled to left, which brought in Lewis.

In the top of the third Pomona grabbed the lead after a double to left brought in an unearned run, which was followed by a single to left that brought in the second runner, giving them the 2-1 lead.

The Regals were not going away as they had a three-run bottom of the third, which allowed them to regain the lead. Junior third baseman Olivia Leyva singled to center bringing in two runners and giving the Regals the 3-2 lead.

Lewis reached on a fielder’s choice but got stuck in a rundown between first and second, and this allowed Leyva to steal home, increasing the lead to 4-2.

The top of the fifth again saw the game tied up after Pomona was able to bring in two more runs.

The Regals answered with two runs of their own. Lewis singled to left bringing in Watanabe, followed by junior catcher Abbigael Howard hitting a sac fly that brought in Leyva after she reached base with a single of her own.

The score was 6-4 and that is how it stayed as White-Madolora came in for her final regular-season game and got the save.

White-Madolora spoke post-game of what being a Regal meant to her.

“We all play to one common goal and we all play for each other. There’s no individual, but there is a solid team base,” White-Madolora said.

White-Madolora said she plans to finish getting her exercise science degree and apply to grad school for athletic training programs following graduation.

“Being a Regal has meant having dedication and determination no matter what. Pushing through adversity and just fighting. This year we have been scrappy and gotten wins that have been hard to come out with,” Manwell said.

Manwell, who is graduating in only three years after double majoring in criminal justice and psychology, said she plans to work with local sheriff departments after she graduates.

Sooy, who is on many of the record lists here at Cal Lutheran, played her final regular season game for the Regals. After graduation, she hopes to be a part of something that involves sports information.

“Being with the team and coaches every single day is what I will miss. It’s going to be hard, but I know we always play hard and work hard and that is what this team has given me and I am going to miss that,” Sooy said.

Unfortunately, CMS was unable to get the win over Chapman and it meant it was the end of the road for the Regals. They finished the 2017 season with a 17-19 record overall and a 14-14 record in SCIAC play.