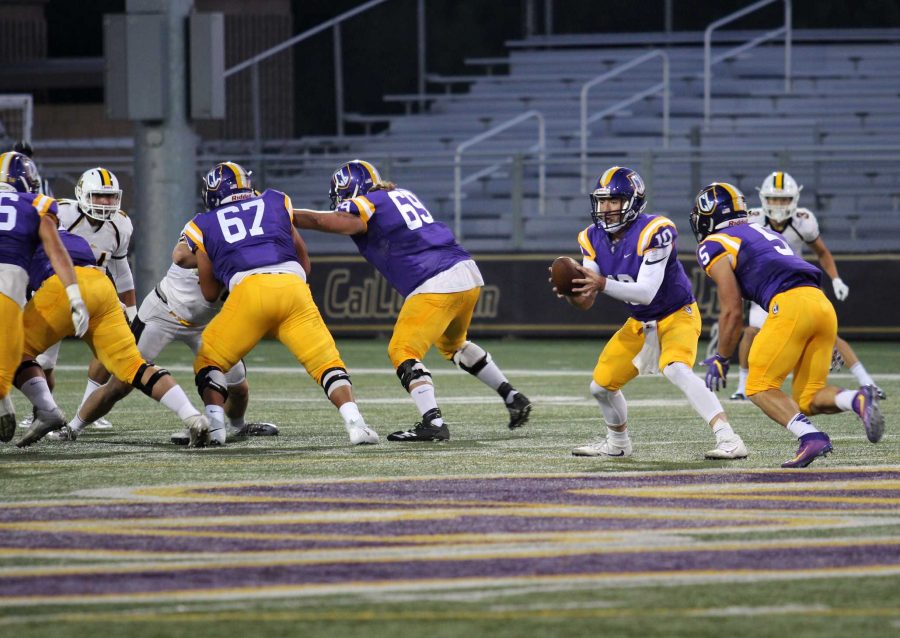 As California Lutheran University Head Football Coach Ben McEnroe walked off the William Rolland field Saturday evening, he had a smile on his face because his Kingsmen were able to hold off a resilient Pacific Lutheran University football team that were threatening to steal the win late.

McEnroe and the Kingsmen football team were looking to get the sour taste out of their mouth from the 2016 narrow loss to the Lutes of Pacific Lutheran.

Senior quarterback Adam Friederichsen, senior wide receiver Aaron Lacombe, and senior wide receiver Wendell O’Brien overwhelmed the Lutes defense Saturday with 320 yards of total offense coming from Friederichsen alone. Both receivers topped the century mark, but it was the defense that came up big in the second half with two sacks and an interception in the end zone to seal the deal, 27-21.

“I’ve never been more proud of a group of guys, who have been through a lot,” McEnroe said.

For the past few years, Pacific Lutheran has held the advantage in this rivalry series winning three of the last four games, which has started Cal Lutheran on the back foot at the beginning of the year.

But it was Cal Lutheran who got the upper hand in this one. The Kingsmen were able to outgain the Lutes 428 to 303, and 56 of those yards came on an early play when Friederichsen was able to find Lacombe deep down the field, which resulted in the first score of the game. Cal Lutheran led all offensive categories in this game, which includes the running game where senior running back Chris Beeson had 14 attempts resulting in 58 yards on the ground while adding a touchdown to his name.

Friederichsen was able to make the most of the vertical ball as he racked up 277 yards and two touchdowns. Both of Friederichsen’s touchdowns were on throws that were over 50 yards.

“We’ve been watching PLU film since the last play of the end of the last season. Preparing for that amount of time makes you a little anxious, but we get to prepare all through camp,” Friederichsen said.

Friederichsen is one of 23 seniors on the team this year.

“It was a really good team victory. Our defense played phenomenal, our offensive line and skill position players played great… It was just a good team win,” Friederichsen said.

“First time in a purple jersey. It’s exciting… I was just more excited to show what I can do and what our team can do because I think we have a really special team this year…just know that we like to get after the quarterback,” Griffin said.

The Kingsmen travel to Oregon for their next game on Saturday Sept. 16 to take on Willamette University, who fell to Rhodes College in their first game of the season. The Kingsmen will look to start the year 2-0 for the first time since 2015 where they also played Pacific Lutheran and Willamette to open the year.