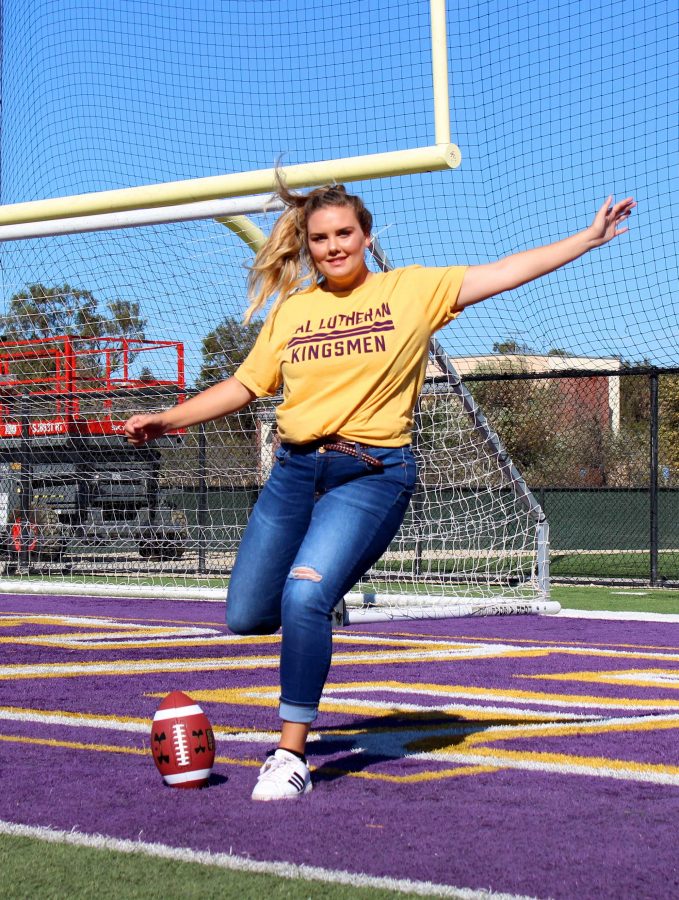 California Lutheran University has a new kicker for the football team, and her name is Morgan Salzwedel. Salzwedel has played soccer, basketball, volleyball and football, but has been kicking for four years now.

She is currently on the junior varsity women’s soccer team at Cal Lutheran, and after trying out in September for the football team and receiving confirmation from her soccer coach saying she could play two sports, she was added to the roster.

According to the NCAA, Title IX, which is part of the federal Education Amendments Act, requires men and women to be offered the same opportunities to play sports.

Salzwedel said, “Honestly, it brings a lot of empowerment for me—being able to show that girls can do the same thing that guys can do and in such a physical sport. It brings me a lot of strength, not only physically, but mentally; I’ve gotten a lot more confident in myself.

Ben McEnroe is the head coach for Cal Lutheran’s football team and has been with Salzwedel throughout her journey of joining the team. He noted that it was a joy to have her on the team and also talked about her skill.

“There’s no question she can do it, it’s just competition is what it is, and she’s going to have to come in and beat out our other kicker, and they’re both aware of that and it’s kind of cool that he works with her—they communicate, trade notes and talk about it, and at the end of the day it’s not any different than if we had two guys out there or two girls out there,” McEnroe said.

Dominick Grimm is the other kicker on the team. He has been around Salzwedel for practices and the two have shared feedback to help each other advance as players.

“She’s really determined to grow and she’s not scared to ask for help, which is huge, especially for her, I mean, jumping from high school to college, especially as a true freshman, it’s a pretty big deal. She’s always open to working more or getting the extra kicks in that she needs,” Grimm said.

While Salzwedel does not want to be solely perceived as a woman on a men’s team because she plays for dedication to the sport and enjoyment playing it, she also recognizes that this is a monumental moment, and she wants her story to lead as example.

“I definitely want to encourage other females to step up and really take that chance and get out of your comfort zone, because you never know what opportunities you can get out of it,” she said.

McEnroe spoke on this as well with considering scope and said, “Cal Lutheran is a very open and accepting place, whether it’s related to gender or anything else, so I think it fits into what we’re trying to do here and really help people find their purpose and pursue their passions.”

This season and beyond at Cal Lutheran, Salzwedel wants to concentrate on playing this sport.

She said she wants to “take the first year or two on just focusing my technique, working on my approach and timing and everything—that’ll really help me when there isn’t another kicker.”

Her prior training and experience playing the sport have helped get her to this position where her fellow athletes and coaches commend her as well. Salzwedel has worked with a trainer who kicked professionally, and he helped her become the player she is today.

It addition to this training, both McEnroe and Grimm mentioned her great work ethic and attitude.

“She’s very driven and she’s not out here to make a statement or anything with the team, she just genuinely loves the sport, and I think she’s going to get her chance this year too; she should be good,” Grimm said.

Salzwedel looks forward to continuing to bring this and more forward this season. Her goal is to be in games, get points and help the team out.

“I’m here as a teammate, I’m not here for anything else, I’m not here just to get attention—I’m here to work hard for the team and to get in games and help out. It’s not for selfish reasons that I’m out here—I’ve done this for a while; I’m a team player. I think that’s what sets people off—they think I’m here for the attention and to hang with a bunch of dudes all day, but I’m here to work hard,” Salzwedel said.