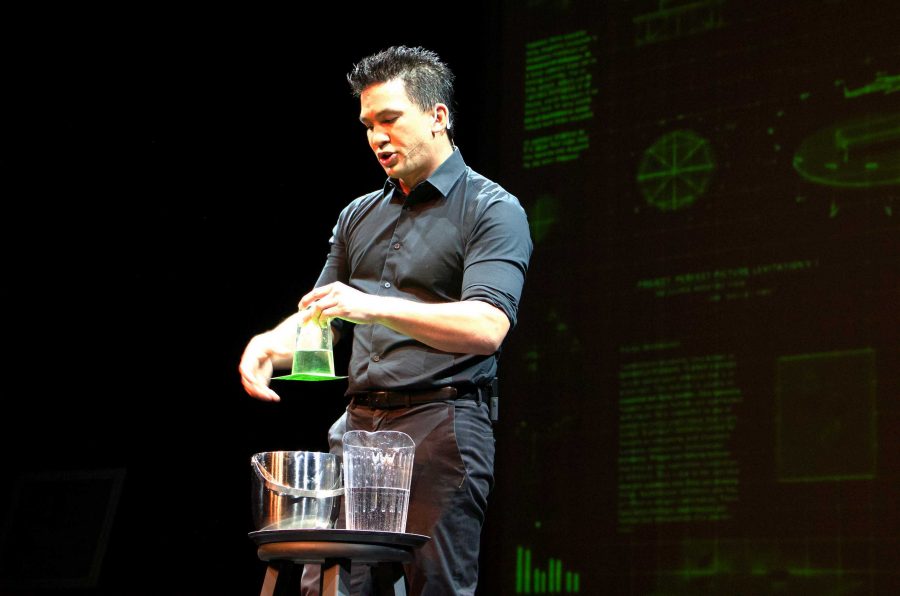 The magic of science: Magician Jason Latimer performing an illusion with water at the STEMtastic! event. Photo provided by Phil Hampton

“The work of the network is really to try to carry on a conversation about how might we enhance STEM [science, technology, engineering and math] in our community and work together toward a common goal, all kids benefitting from high quality stem opportunities,” said Phil Hampton, network director of Ventura County STEM.

Ramirez explained that the event started off with a mixer while the audience waited for award recipients to arrive. At the start of the event several leaders of the network gave introductions.

“It’s very exciting to be here and to be able to recognize so many individuals who have had a significant role in contributing to STEM excellence right here in Ventura County. It is absolutely vital that our young people have the opportunity to work in STEM fields,” said California State Assemblywoman Jacqui Irwin.

Irwin mentioned how 290 new engineers are needed in the county each year.

“What we’re trying to ensure is that those getting STEM degrees in this area stay in Ventura County,” Irwin said.

“I’ve only been here since April and we’re starting to be recognized, that we have a name in STEM world. We’re all well along our way and it makes me feel like the ALLIES program is really helping to contribute to this,” Ramirez said.

Following the award ceremony, the showcase speaker of the event was magician Jason Latimer. Hampton said he got in contact with Latimer because he was a high school classmate of a staff member.

“When the magician came out and started interacting with the group, the kids, they turned on. We had kids shouting and standing, their energy level was extremely high. That’s what we’re all about with the Ventura County STEM Network is to try to turn kids on to science [and] STEM learning,” Hampton said.

When Latimer met kids after the show he would ask what their favorite tricks were, Hampton said. Latimer would then explain what area of STEM the trick demonstrated and recommend that the kids consider their areas of interest.

“It’s taking what gets them excited and now translating that. A lot of studies show that by the age of 13 to 17 about one third as many young women are interested in careers in STEM than men. It goes from 33 percent for men in ages 13 to 17 all the way to about 11 percent, horrible for girls,” Hampton said.

Hampton explained how the Ventura County STEM Network started in fall 2014 and has grown tremendously. It is recognized as one of 50 STEM ecosystems across the U.S.

The network’s goals include encouraging kids to become interested in STEM at younger ages and to develop their math and science skills, as well as supporting high schools in getting students ready for college-level math.

Cal Lutheran is involved with the Ventura County STEM Network through University Advancement, the Graduate School of Education and individuals in experiential learning. It is also connected through the P-20 Council of educators dedicated to bringing more STEM opportunities to Ventura County.

“CLU has been an important partner in VC STEM. Associate Provost Grady Hanrahan serves on our steering committee and last year’s STEMtastic event was held at CLU,” Hampton said.

Ramirez wants to be more involved with the VC STEM network and hopes Cal Lutheran will get a radical award in the future.

“When I first arrived here, one of my rules was to make Cal Lutheran competitive in the STEM disciplines,” Ramirez said.

Ramirez said this means increasing the reputation of Cal Lutheran as a STEM university by becoming visible and reputable in order to attract more students.

“We’re trying to do everything that our grant has outlined for us and anything further that we can do to help support any STEM students on this campus,” Ramirez said.