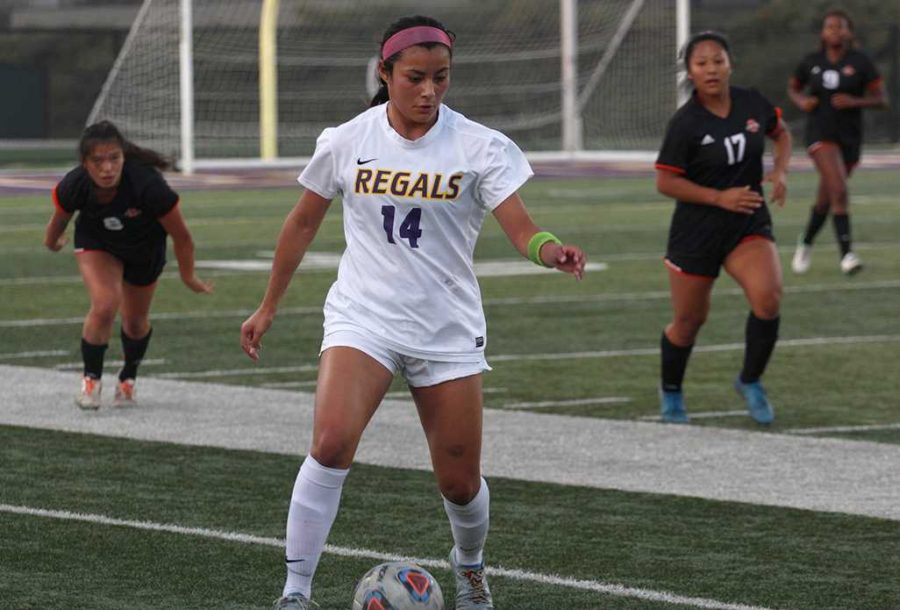 Freshman forward Sam Cornejo scored twice in Thursday night’s game. The Regals received a bid to the NCAA tournament on Monday and will host UC Santa Cruz on Saturday where Cornejo will look to continue her goal-scoring form. Photo by Danielle Roumbos- Sports Information Photographer

The California Lutheran University Regals soccer team hosted the Whittier College Poets  and  suffered a tough 3-2 loss. The game ended within a few minutes of  overtime with an accidental own goal on the Regals. The game took place Thursday Oct. 3 at William Rolland Stadium as Cal Lutheran hosted the semifinal game of the Southern California Intercollegiate Athletic Conference (SCIAC) Postseason Tournament.

The game began with the Regals making attacks and forcing the Poets to play more defense.  The first half was in favor of the Regals offensively. By the end of the period the Regals had five shots while the Poets only had one.  Unfortunately for the Regals, none of those shots ended in a goal in the first half ended with the score tied at 0-0.

Within the first five minutes of the half, Regals’ freshman forward Sam Cornejo shot and scored.  The goal was accompanied with an assist by senior defender Olivia Leyva.  Soon after Cornejo’s goal, the Poets came back to have junior forward Miranda Yzabal score a goal to the left side of the goal with an assist from her midfielder teammate Lauren Kai.  Cornejo responded to the goal by Yzabal by scoring her second goal of the match just 14 minutes later to take the lead 2-1.

Regals senior forward Alexandra Albaeck received a yellow card in the first half. In the second half, Albaeck picked up her second yellow for an aggressive challenge near the touchline. The second yellow card the referee mean that the referee had to stop the game and give her a red card. Albaeck was sent off and was forced to leave the game.  Regals Head Coach Frank Marino said that the “referee made a terrible decision” on the foul called on Albaeck and his decision to give her a red card.  The Regals, due to the red card, were forced to play the rest of the game with only 10 players instead of the regular 11.  Marino believed that the red card “changed the complexion of the game.”

Three minutes after Albaeck had to leave the game, Poets defender Andrea Aldama scored the tying goal with a long shot that flew into the top left corner of the goal.  The second half concluded shortly after Aldama’s goal and the 2-2 tie would result in the game going into overtime.

Two 10-minute overtime periods were set to be played and a goal would instantly end the match and give the goal-scoring team a win. Unfortunately for the Regals, the Poets scored just three minutes into the first overtime period and they would win the game 3-2.  The goal came from an accidental bounce off of Regals goalkeeper Gabby Flores and was scored an own goal.  The goal gave the Poets the victory and a spot in the SCIAC Championship game against the Pomona-Pitzer Sagehens.

“I think we played well and strong but it was hard to grind out those last 15 minutes down a player.  I’m proud of the team and hopefully we get a bid into the NCAA tournament,” said Regals sophomore defender Riley Martin.

Decker believes that the game was a “testament” to their whole season.

“They push themselves to the limit in everything they do.  A tough result for us but really well played,” Decker said.

Cal Lutheran received a bid to the NCAA Tournament on Monday and will host UC Santa Cruz on Saturday with the time to be determined.