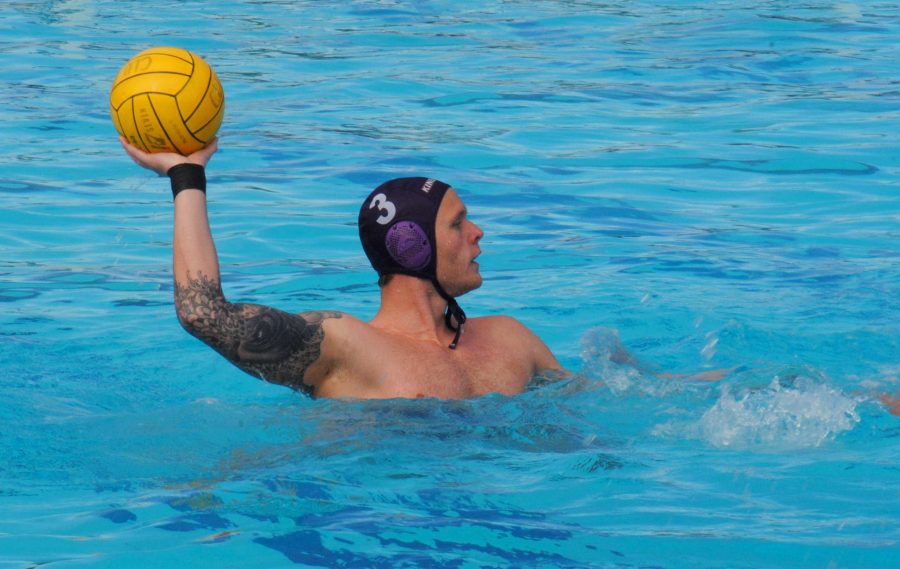 The California Lutheran University Kingsmen water polo team hosted the Claremont-Mudd-Scripps Stags at the Samuelson Aquatics Center for Senior Day Saturday morning.  Unfortunately for the Kingsmen, the game resulted in a loss to the Stags 10-5.

Before the game, the seniors on the team were recognized for their contribution to the team.  Davy Thomas, Jake Venckus, Zach Zamecki, George French, Chris Gardhouse, Kevin Oetken, Ramon Olivier, and Nick Loomis, were honored for their dedication to the Cal Lutheran water polo program.

The game began with the Stags scoring an early goal in the first minute of the game, a shot by attacker Zack Rossman.  Kingsmen attacker Kevin Oetken was able to score while a Stags player sat out 20 seconds of the new 30-second shot clock for an exclusion penalty.

Half way into the first quarter the Stags were awarded a penalty shot which Stags player Zack Rossman shot and scored.  The Stags would score again because of attacker CJ Box within the last 4 minutes of the game.

The second quarter started off with a quick goal by Stags utility Robert Driscoll but Kingsmen utility Matt Fong would quickly respond.  The Kingsmen would score again less than a minute later off of a penalty shot by center-defender Chris Gardhouse.

In the last minute of the quarter Kingsmen utility French was excluded and the Stags were able to score one last goal. At half time, the Stags were in the lead 5-3. Claremont-Mudd-Scipps would solidify their position in the SCIAC Postseason Tournament with a win over the Kingsmen. The Stags would come out on the attack to start the second half.

Soon after the fourth quarter began, Kingsmen left-handed attacker Zamecki scored.  With 4 minutes left in the game, Kingsmen senior attacker Thomas was excluded and the Stags were able to score due to a shot by attacker Noah Deer.

“We came out a little flat and I think we lacked a little bit of energy,” senior Gardhouse said.  “It was a really good rally at the end.  It showed some of the character and tenacity that this team has.”

Stags attacker Zack Rossman would end up scoring his third goal of the game in the last minute and a half.  With a last push by the Kingsmen, French was able to score with 26 seconds left.  The game ended with the Stags beating the Kingsmen 10-5.

“I thought we played flat today, but we have been through a lot of tough dog-fight games this year,” Head Coach Craig Rond said.  “I understand how on the final day the game had nothing on the line…but it’s OK.”

Seniors French, Gardhouse and Oetken said that they felt bittersweet about finishing their careers as Kingsmen water polo players.  They also said that there is no other team they would have wanted to finish off their careers with.

“I think that the main thing to come out of today though, is that we all stuck together, we stayed like a family rather than just a team,” French said.