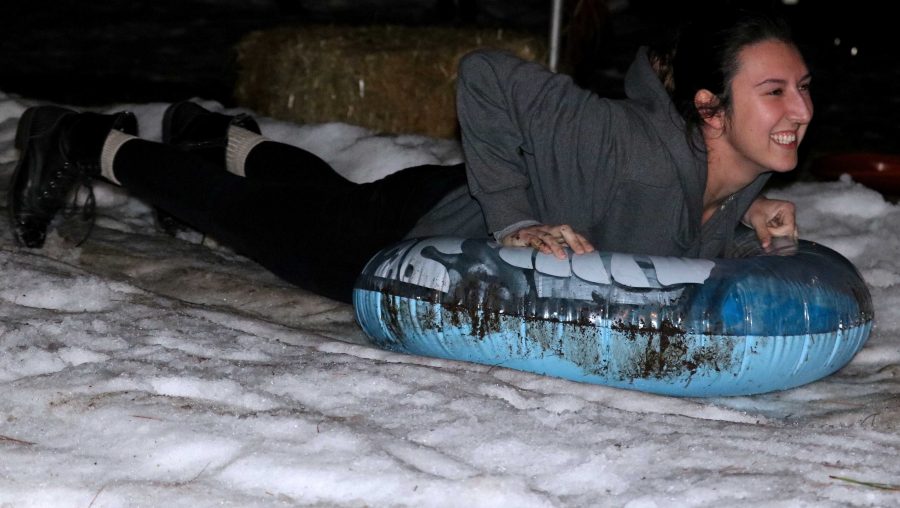 Students could participate in several activities, including holiday karaoke, wooden ornament decorating, making cards for Children’s Hospital Los Angeles, taking pictures with Mr. and Mrs. Claus and feeding reindeer. There was also hot chocolate and a popcorn bar with condiments such as marshmallows, M&Ms and pretzels.

“I think it’s really fun because I’m from Colorado, so it kind of makes you feel at home because of the snow and everything,” first-year student Karyme Lara Chagoya said. “It’s just really cool seeing that the student government made this event possible.”

Programs Board made a few adjustments this year to make sure students were even happier with the event, Schindler said.

Programs Board ordered 40 tons of synthetic snow from Arctic Glacier ice company, which was an increase from last year’s 35 tons of snow, said Julie Martinez, Programs Board junior representative and lead organizer for the event.

“I think the idea of snow, even if it is artificial…definitely puts you in the festive holiday spirit,” Martinez said.

This year, Programs Board decided to use inner tubes instead of sleds.

“The sleds that we provided in the past have broken very easily and the budget usually just doesn’t allow us to get enough [sleds] for how easily they break so we got something different that we could afford more of that hopefully still works,” Schindler said.

One of the downsides of using inner tubes instead of sleds is that the person’s pants get wet, Lara Chagoya said.

The event also offered attendees the opportunity to feed reindeer.

First year Anna Demaria said seeing and feeding the reindeer was her favorite moment of the event.

“There’s so much to do and I love that everybody is in the holiday spirit,” said Demaria. “I’m having a blast.”

Attendees also had the opportunity to write and decorate holiday cards for Children’s Hospital Los Angeles.

“Imagine just being sick and in the hospital if you’re a kid, but then imagine during the holidays…even just a simple card is really amazing, I think,” said Kyle Tamkin, Programs Board senior representative.

Schindler said the snow, the activities and overall atmosphere are what make “Let It Snow” successful.

“It’s a really nice gathering before the frenzy of finals and everything to really celebrate with everyone the coming holidays,” Martinez said.

Martinez said the part she looks forward to the most after planning an event is stopping and seeing everyone’s faces in the crowd as they enjoy it.

“You just want to see it manifest itself into something that makes people all celebrate and enjoy things together,” Martinez said.