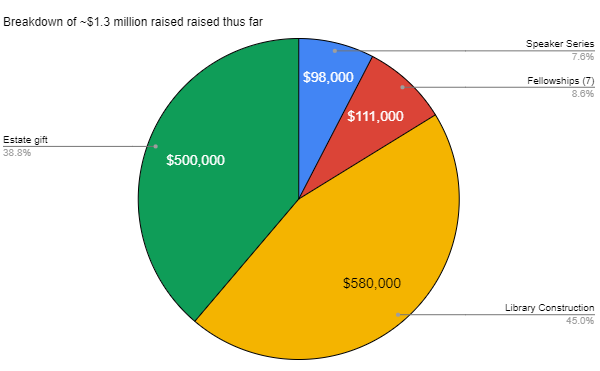 The cost of the Elton and Janice Gallegly Center for Public Service and Civic Engagement totals $3 million. This would fund the construction of the Center, endowment of fellowships, a speaker series, digitizing Congressman Gallegly’s archives and a scholars in residence program.

Out of the $3 million budget, $1.3 million has been raised thus far, said Associate Vice President of University Advancement Kristine Calara.

The $1.3 million breaks down into several different areas:

– $580,000: cost of constructing the physical Center in the Pearson Library

There are currently different bids pending on various parts of the construction process. The company Northwest Excavating is donating time for leveling the ground, and other materials such as lumber and framing materials are expected to be partially donated as well, said Associate Vice President of Facility Operations & Planning Ryan Van Ommeren in an email interview.

“I will add that the sound wall itself is less than 1 percent of the project budget,” Van Ommeren said.

-$500,000: estate gift from Dorothy Hammond that is in processing

The next steps in fundraising for the remaining amount of the $3 million total budget are to endow the Gallegly fellowships and digitize Gallegly’s congressional archives. California Lutheran University President Chris Kimball said that endowing the fellowships and speaker series is the most important part of the next step.

“One of the hopes is that the space, the Center itself, will get people excited and say, ‘OK this is really going to happen, it’s really going to be there, I’m now willing and excited to give to the fellowships,’” Kimball said. “That’s been one thing that’s frankly been disappointing and one of the hopes is that people are kind of sitting on the sidelines waiting for the space will now get off the sidelines.”

Funds that need to be raised/approved to complete the $3 million budget:

To endow the fellowship would mean investing to ensure that the full-tuition fellowship for the Masters in Public Policy Administration degree continues to grow in perpetuity according to Calara and Kimball.

-$98,000: grant proposal to the National Archives and Records Administration

This proposal is for a two-year plan for an archivist to sort through the approximately 450 boxes of records from Gallegly’s 13 terms in Congress, and digitize one-third of the appropriate records.

-$101,000: cost to digitize the remaining two-thirds of the archives

“[Archiving] is a very special field, they go through, they sort all of the files and put them all in these acid-free folders and acid-free boxes to make sure that they last forever. And then this archivist is going to determine which paper, what documents are relevant for research,” Calara said.

Currently, construction of the Center in the Pearson Library is on hold until the end of the fall 2017 semester in response to the concerns raised by students and faculty regarding noise during finals preparation. The delayed construction means that the Center will likely be completed at the end of the spring 2018 semester.

“They were thinking they were going to start construction in November so now we’ve pushed it back so that means the completion date will be later,” Kimball said. “I would think at the earliest, late May.”