Kingsmen Come Up Short Against Sagehens 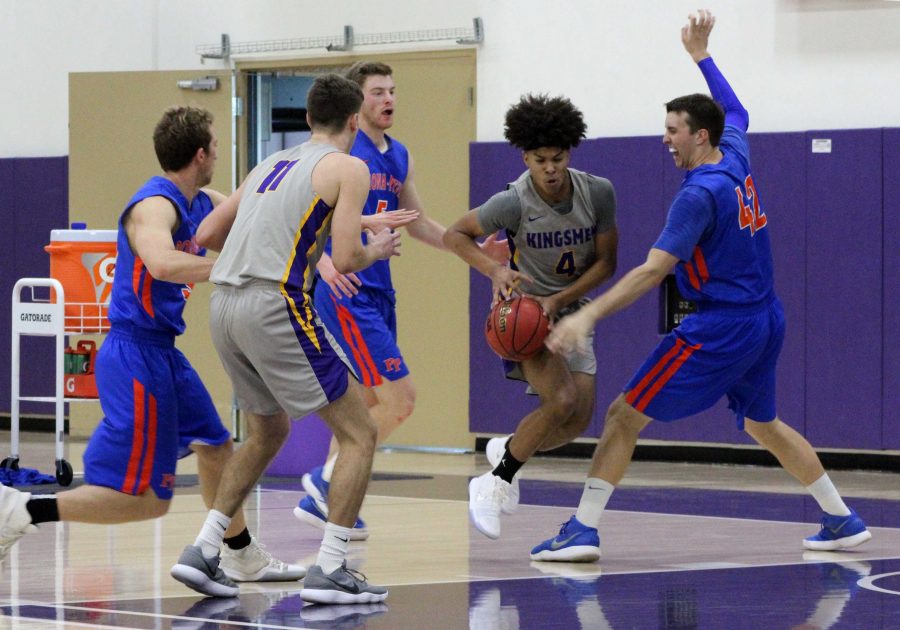 Freshman Cole Thomas was a bright spot for the Kingsmen on Saturday. He tied his season high with 8 points while going 3-4 from the field. Photo by Saoud Albuainain- Photojournalist

The California Lutheran University men’s basketball team fell short to the visiting Pomona-Pitzer College Sagehens by a score of 93-62 on Saturday, Feb. 10.

Three days after delivering a thrilling buzzer-beating victory on the road in a non-conference game against University of California at Santa Cruz, the Kingsmen were unable to replicate the same magic against a Pomona-Pitzer team that opened up a 15-2 lead early in the first half.

The Sagehens moved the ball efficiently with precise passing around the perimeter, which allowed them to find open shooters with ease. The team combined for 28 assists, twice as many as Cal Lutheran’s 14 total assists. Junior guard Daniel Rosenbaum and sophomore guard Micah Elen led the way with scorching hot three-point shooting, combining for 11 of Pomona-Pitzer’s 18 made three-pointers. As a team, the Sagehens shot 45 percent from beyond the three-point line and 50 percent from the field.

The Kingsmen, on the other hand, struggled to get into a rhythm offensively. The violet and gold shot just 41 percent from the field and 32 percent beyond the arc.

Moffett, Ferreira’s backcourt running mate, said that the team’s struggles had as much to do with its poor shot selection as it did with poor rotation on defense.

“They were running a zone, so instead of trying to work it inside, we settled for a lot of open shots,” Moffett said. “We also weren’t able to close out the shooters in time, so I feel like our rotation on defense is something we need to work on.”

Head Coach Tim Fusina echoed Moffett’s assessment of the Kingsmen’s struggles on both sides of the ball.

“[Pomona-Pitzer] were lethal because we didn’t pressure the ball,” Fusina said. “We didn’t jump to the ball, and offensively we settled for shots. We want to get the ball inside because we don’t want to settle, and today we settled.”

Down 41-20 with under five minutes to play in the first half, the Kingsmen found a brief sign of life offensively as Ferreira and Cole drained two quick three pointers to cut the Pomona-Pitzer lead to 41-26. But after burning a timeout, the Sagehens would regroup with a 13-4 run of their own, ending the half with a comfortable 54-30 lead against a struggling Kingsmen offense that struggled to make its shots.

As a team, Pomona-Pitzer significantly outrebounded the Kingsmen 46-24, tallying 20 points on second-chance opportunities.

“Defense is something that we need to work on,” Moffett said. “We gave up way too many open shots and that was what gave them such a big lead.”

After the loss, the Kingsmen move to 7-14, 4-9 in Southern California Intercollegiate Athletic Conference, with three more conference games until the postseason tournament. They will have an opportunity to bounce back against a team they beat earlier this season when they play host to the Caltech  Beavers Wed. Feb. 14 at 7 p.m.