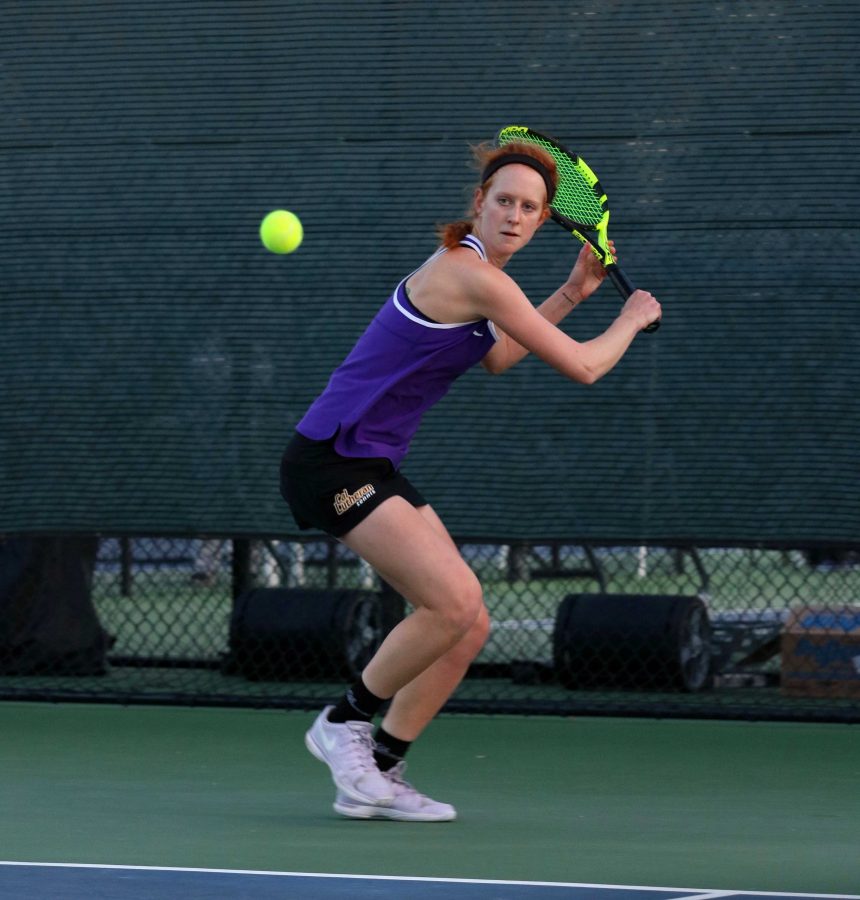 Junior Sarah Seeman picked up her fourth consecutive win on Saturday. She will look to continue this streak Friday, March 25 when the Regals take on Wellesley College. Photo by Inga Parkel- Photojournalist

The California Lutheran University women’s tennis team competed to the last set in their matchups, but came up short against Southwestern University 8-1. The Regals fell 0-3 in the doubles matches, and went 1-5 in the singles.

The day started with the doubles matches, where the number 2 and number 3 teams lost to the Bucks 8-2, whereas the number one spot, which consisted of junior Christie Kurdys and senior Gianna Cupo, who battled through the first night match of the season, but came up short 8-3.

“We came out with a strong mentality, we just were a little rusty,” said senior Nicole Nuemann, who played alongside junior Sarah Seeman in the number two spot in the doubles match against Southwestern.

Nuemann went on to say that the team does not feel in midseason form, but are working very hard to get there.

The singles for the Regals came with much more fire power, but was unable to keep the edge, losing the sets 5-1.

Kurdys battled through, but fell short in the number one spot 6-3 then 6-0 following.

Nuemann as well as senior Annette Sousa and freshmen Jade Moore all competed but fell short in their matches against the Bucks.

Seeman, playing in the number two spot, was the match to see. She was the only player on the team to win her match, fighting hard to win the first set 7-6. Southwestern’s number two spot came and took the second set 7-6. Seeman was able to hold off the late rally, winning the sudden death third set, and the match 10-6.

Southwestern is ranked 24 in Division III. They looked to come away with the sweep but the Regals battled hard throughout the whole night and took a win away from the Bucks.

“Sarah’s match was the highlight of the night,” said Head Coach Mike Gennette.

Gennette said that the scores did not determine the actual outcome of the game, and the Regals fought hard throughout both matches.

The main concern for the players was getting back to the level of competing they are accustomed to.

“With the rain and coming back from being away can certainly bring some rust into your game, not feeling the groove of the game,” Cupo said.

Cupo, along with other players on the team, feel the need to work harder in practice and bring a winning culture to the court for competitions.

“We’re working really hard, going to weights, practicing everyday. We just have to put in more matches to get better, once season progresses, we’ll be good,” Kurdys said.

Gennette said the fundamentals are what is going to be the main focal points in practice. Making sure the players know where to be and how to do it, and focusing on playing with a partner in doubles matches.

The Regals will look to quickly turn around against Whitman the next day after enduring a hard fought battle the day before. But Gennette is optimistic that the girls’ passion for the sport will help them bounce back.

“We’re lucky to be here, go to this school, and play tennis,” Gennette said.

The Regals, now 2-4, are looking to ramp up this season with what the players consider a “winning culture” and to move forward.