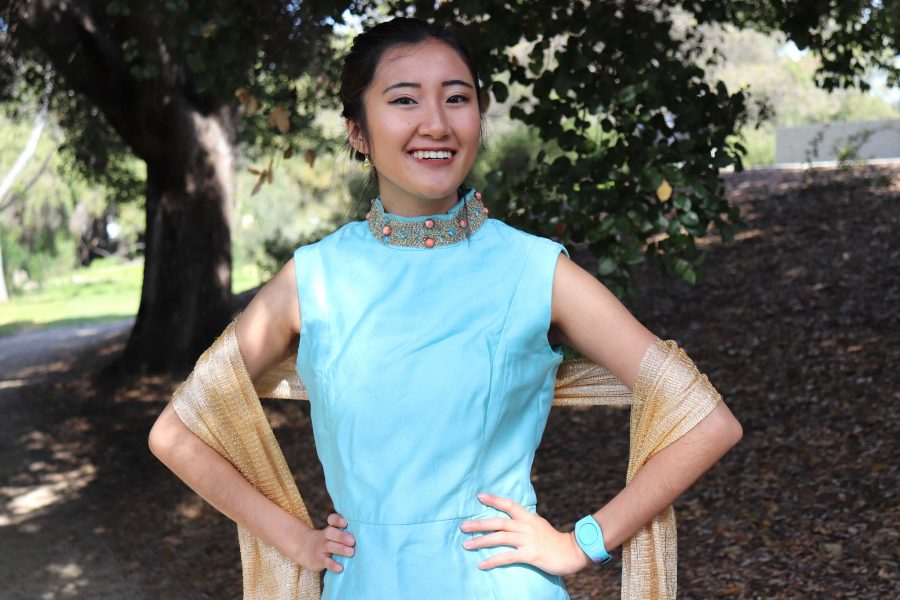 Disney-bound post graduation: Recently accepted into the Disney College Program, Emily Yoshida has been going to Disneyland for years and oftentimes gets dressed up in costume.

Graduating senior Emily Yoshida was accepted into the Disney College Program in Orlando, Florida. According to Disney’s website, the program is  about half a year long and is comprised of a mixture of working in the parks and taking coursework.

One of Yoshida’s lifelong friends Missie Yamamura, a sophomore at Concordia University, said that Yoshida has always been a die-hard Disney fan.

“We met in fourth grade and she always had the backpack and the clothes,” Yamamura said. “She’s from Japan, so she would always go to the Disneyland in Tokyo and bring back souvenirs for the both of us.”

Yamamura said that Yoshida has always had aspirations of working as a Disney character at the park and being a part of the Disney crew, which encouraged her love of Disney and their music.

“Disney is part of the reason why she chose to go to school in California,” Yamamura said. “She had it all figured out: the school she wanted to go to that would allow her to have a creative major. And she is a very cheerful person, so Disney matches her personality well.”

Yamamura said Disney had a big effect on their friendship, and that she is very proud of Yoshida for following her dream.

“Most of our friend group didn’t really know what they wanted to do when we graduated high school, so we are all incredibly proud of her for knowing what she wants and going after it,” Yamamura said.

Yoshida said that applying for the DCP has been a long time coming.

“I have always wanted to apply, but this school [Disney’s] is very academically prioritized, so I wanted to do it after graduation because I didn’t want to fall behind,” Yoshida said. “I applied a couple times just as practice because their process is really interesting and it’s very selective.”

Yoshida’s passion for Disney started when her mother took her to the parks as a child.

“Ever since my mom showed Disney to me, I have loved it. It’s kind of a hereditary thing,” said Yoshida.

One of the other reasons that she loves Disney is how innovative they are.

“They seem to try to one-up everybody with how high-tech they are,” Yoshida said. “Places like Universal Studios, for example, have The Wizarding World of Harry Potter which is very similar to how Disney constructs their attractions, but the rest of their park is different.”

Yoshida said that she laughs when people complain about how long it takes Disney to add new themes to their parks because that is why all their attractions are so well done.

“They are always renovating and improving, and I think that’s pretty neat,” Yoshida said.

Yoshida said that Disney’s constant innovation and improvement influences her actions as well. She said that she is always trying to improve herself and her life skills because things can always be bettered.

Yoshida’s acceptance into the program is another step to improve her skills. She said hearing the news was surreal.

“I was actually texting one of my friends at the time complaining about how I hadn’t gotten into the first wave of acceptances when I got the email that I was accepted,” Yoshida said.

She said she is excited about the experience she will be gaining from the program.

“I will be able to network a lot and I would like to get into the Walt Disney engineering aspects and do their sound design,” Yoshida said. “It can definitely benefit me because of how they do a lot of their entertainment, and it will look great on a resume.”

One of Yoshida’s professors, a senior lecturer in the music department, Eric Kinsley says that the program is a perfect fit for her and that she is incredibly deserving of it.

“I hope that she will be successful in it, and I am sure she will be running the place before we know it,” Kinsley said. “She will become a big Disney executive and make us all proud.”

Kinsley said that the skills Yoshida gains from the program will greatly benefit her.

“She will learn new skill sets and will be networking a lot,” Kinsley said. “She will be interacting with the corporate mindset while bringing a young perspective and energy to the project.”

Kinsley said the skills Yoshida will learn through the Disney College Program will be beneficial to the enterprise and her.

Yoshida said her goals after she finishes the DCP are either to extend the program a little longer or preferably to do a professional internship that will lead her to her dream job.